You are at:Home»Night & Day»Event Review»Witty conversation, fast-moving adventures and lots of music: A review of ‘Shrek The Musical’

The kid must have been no more than 12 years old  but already was old enough to recognize good musical theater when  he saw it. “I saw the cartoon and I liked this better,” he said as he exited Beef & Board’s Dinner Theatre on a recent night after having seen the theater’s production  of “Shrek The Musical.” “Donkey was funnier and the princess was a great singer.” Sorry about that Eddie Murphy, who played Donkey in the 1991 Oscar winning, Dreamworks animated film on which the musical is based. 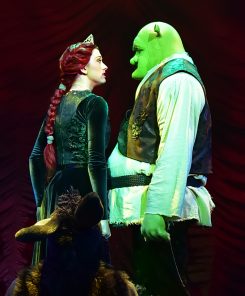 “Shrek the Musical is a true generation “bridger” — from preteens to senior  citizens and all those Gen-Exers, Millennials and Baby Boomers —  between curious enough  to see how the animated film translated  to the stage. Quite well, if B & B’s production is an example.

The recent crowd at the Northwestside dinner theater held a wide range of  ages, all enjoying on the scenes on their own levels with humor reaching both young and old with different meanings. Jokes about the four-foot King Harold’s size — “He’s probably really good at small talk” or “Maybe the Princess should lower her expectations about the king.” Or like the battle of belches and flatulence between Shrek and the princess. Kids love body toots during the song “I Think I Got You Beat.”

Expertly directed and choreographed Ron Morgan production, the family musical runs through July 2, it is a family joy, filled with amazing costumes, witty conversation, fast-moving adventures and lots of music (which may or may not have interested the younger listeners).

The simple plot for the musical is about an ugly ogre named Shrek, his wisecracking jackass named Donkey and a feisty princess named Fiona, who initially resists her rescue from a tower in which she has been imprisoned for several years. The goal is to deliver Princess Fiona to Lord Farquaad to marry in exchange for Shrek’s return to his home  in the swamp. Along the journey, the audience is introduced  to a colorful bunch of 16 fairytale misfits such as the Three Pigs, the Three Bears, Little Red Riding Hood and more, including  a smart-mouthed Gingerbread Man, all of whom have also been banished homeless by Lord Farquaad. Leading the pack is a wild and energetic Pinocchio, who nose grows with each fib he utters, played outrageously by Cody Knable.

Lord Farquaad, played by John Vessels,  was hilarious as well, with his short-legged scoots and his Vaudeville-like, over-the -top dialogue.

Peter Scharbrough, fresh from his role as Ruben in last month’s “Joseph and the Amazing Technicolor Dreamcoat,” plays the mean, yet soft-hearted Shrek well, despite the hindrance of his green, ogre mask, which made his facial expressions non-existent and his singing vocals slightly muffled.

Emily Grace Tucker, who enters the fray midway through the first act as Princess Fiona, vies Julius Thomas III,  as Donkey, for best performance of the night – Tucker with her wit and quirky body language and Thomas with his street-smart wisecracking. (“I’m going to need a lot of therapy after this.”)

Hats off to makeup designer Daniel Klinger and costume designer Travis Grant of MSMT Costumes for a brilliant display of detailed and brilliantly colored looks. The “Forever” scene with Donkey, the Dragon (song-belter Kelly Teal Goyette) and the Knights was spectacular. And musical director Terry Woods kept the songs moving along briskly with his talented quartet.

Kudos also go to scenic designer Michael Layton for building a rotating forest which created a scene of the characters walking through the woods.

Another nice touch to the performance was the periodic placement of the characters throughout the aisles of the theater. They must have seemed bigger than life to the young ones in the crowd.

For theater-goers of all ages, “Shrek the Musical” is a fun-filled treat of mischief, mayhem and music. As a family show, children ages 3-15 receive a $10 discount. For more information, call the box office at 317.872.9664.