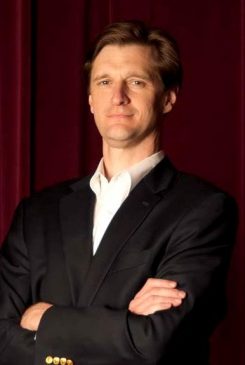 Indianapolis Opera general director David Starkey is optimistic about how audiences will respond to the 2017-18 schedule.

“I think it’s a very attractive schedule because we are just finding a little bit of a stride in being in multiple venues, having some diversity to our programming,” Starkey said.  “‘La Traviata’ being done at The Tarkington is only the second time we will have been there as a company. So it’s still new but at the same time it’s not completely unfamiliar. We’re looking forward to people enjoying the intimacy but at the same time I think The Tarkington does offer a bit of a grandness.”

The Indianapolis Opera opens the season with the classic Italian opera “La Traviata” Nov. 17 to 19 at The Tarkington at Center for the Performing Arts in Carmel.

The second show, “South Pacific” is at the Schrott Center for the Arts on Butler University March 22 to 25, 2018.

“That’s a very familiar place,” Starkey said. “I really challenge the audience to experience the show exactly as it was produced on Broadway with no microphones, a live orchestra, great classically trained singers and actors. This is something we recognized with the success of ‘Man of La Mancha’ (last season). We’re just thrilled to bring that production to life here in Indianapolis.”

The show will feature one of the former students of late Indiana University professor Giorgio Tozzi, who dubbed the singing voice of actor Rosano Brazzi, who played the lead role of Emile de Becque in the movie version of “South Pacific.”

“We have one of the great singers who studied with him sing that role,” said Starkey, who said due to contractual reasons they cannot yet announce his name. “There is such beauty and artistic vitality in the Schrott.”

“It’s not an event we’re putting on but at the same time we want to be able to champion the vocal arts in our community,” Starkey said.

The 42nd Opera Ball will be Nov. 4 at the Deer Zink Pavilion on the campus at the Indianapolis Museum of Art.