Corrie Meyer, director of the Carmel Redevelopment Commission, announced on June 19 that she will run against State Sen. Mike Delph in the upcoming Republican primary. 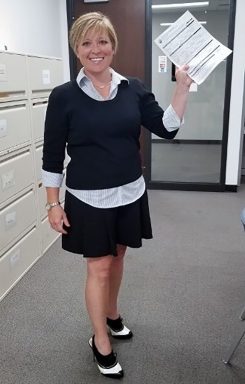 Meyer was named CRC director in March 2014 after serving on the commission and working for years as a landscape architect. She took over for an interim director after previous CRC Director Les Olds left after the CRC built up then-$195 million in debt that the City of Carmel absorbed with a taxpayer-backed refinance of the CRC.

Meyer also serves as president for Nickel Plate Arts in Noblesville and she’s the president and CEO of her strategic planning firm called Innovative Planning.

Meyer said she decided to run because she’s passionate about serving her community.

“I’m ready to put some of my skills and talents into effect at the state level,” she said. “I’m running so we can have an efficient and effective senator in this district that focuses on economy, safety and jobs and not just social issues.”

Meyer said she plans to continue to lead the CRC during the campaign and even after she is elected. Many, if not most, state legislators have another job and she said she will continue to serve Carmel. She explained that technically her company, Innovative Planning, is leading the CRC and she is hired as a consultant on contract, although previously she was a city employee on city payroll.

“As a small business owners, the CRC is a client of mine,” she said. “If I am elected I’ll continue to serve my clients.”

Many construction companies and developers enter into deals with the CRC. If those companies decide to donate to Meyer’s campaign, she wouldn’t say whether or not she would accept those donations, noting that the campaign was just formed.

During Meyer’s time as director of the CRC, she has overseen sale and redevelopment of the former Party Time Rental site, the construction of several new buildings at Carmel City Center including a new parking garage, the redevelopment of the Midtown area of Carmel and the widening of the Monon Trail and plans to construct an ice skating rink outside of The Palladium. Many of these projects are under construction or will begin construction very soon. All of these projects have some form of public investment from the City, as managed by the CRC.

“I think one of my biggest accomplishments is building trust in the CRC,” she said. “We have looked at construction methodologies that have saved the taxpayers money.”

Meyer, named one of the Indianapolis Business Journal’s 40 Under 40 in 2015, originally grew up in Mapleton, Minn. and has a husband Nate and two sons, Andrew, 13, and Will, 8. Meyer was raised on a hog farm and finished her high school education at Boone Grove High School in northwest Indiana. She attended Ball State University where she earned a bachelor’s degree in landscape architecture and a masters of urban and regional planning.

In her personal life, Meyer said she likes to be physically active, running multiple half marathons and even climbing Mt. Kilimanjaro. Meyer and her family are members of Northview Church in Carmel.

“It’s exciting and scary to enter politics,” she said. “It’s a role that I’m prepared to take on.”

Delph has served as state senator for Dist. 29 since a special election in 2005. He was reelected in 2006, 2010 and 2014 and he’s often considered running for higher office, such as the U.S. House of Representatives or the U.S. Senate. Delph is supported by conservative groups and the Tea Party but he has often told Current that he believes his support is much broader than just Tea Party groups, as shown by his election results. Delph ran unopposed in 2006. He was unopposed in the GOP primaries in 2010 and 2014. He defeated Democrat Robin Shackleford in the general election in 2010, 59.2 percent to 40.8 percent. In the 2014 general election, he defeated Democrat J.D. Ford, 54.3 percent to 45.7 percent.

In 2014, the Indiana Family Institute named Delph as its “Legislator of the Year” because of his ”unflinching support of the proposed marriage amendment.” Delph fought to a referendum on same-sex marriage to voters, which would define marriage as between a man and a woman.

Delph has a law degree from Indiana University, works as general counsel for CarDon & Associates and is a major in the U.S. Army Reserves. He was born in Weymouth, Mass. but grew up in the Home Place area near Carmel. Delph and his wife Beth live in Carmel with their five daughters.

Delph did not return a call for comment from Current on his cell phone as of press time.

Meyer didn’t want to be critical of Delph but she said she disagrees with him on several issues.

“I think we’re missing a lot of opportunities by solely focusing on social issues,” she said.

Abdul-Hakim Shabazz, an Indiana political commentator and radio host on WIBC, said he think Meyer will be a stronger challenger than Delph has had in the past but he gives the edge to Delph.

“It’s going to be interesting,” he said. “The odds favor Mike because he’s an incumbent.”

Shabazz said Meyer’s history with the CRC could be a negative in Carmel but the state senate district is much bigger than just Carmel and includes Indianapolis and Zionsville.

“Down in Marion County, I don’t think people will get worked up but Carmel it might be a net minus,” he said.