You are at:Home»Current in Zionsville»Walmart property along Michigan Road for sale 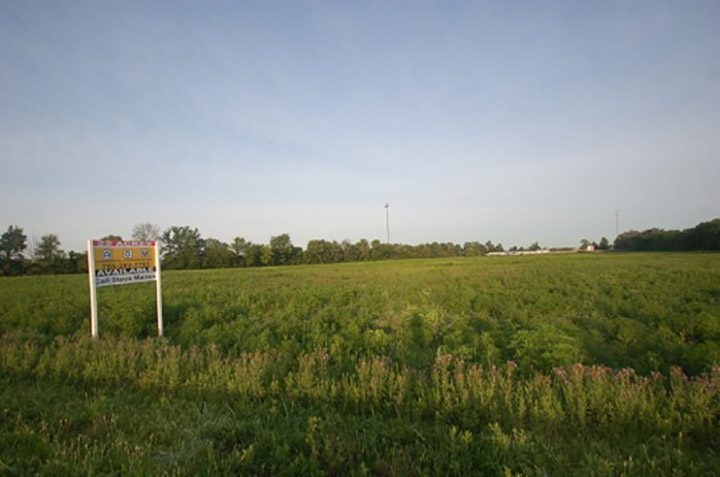 Walmart is looking to sell 22.74 acres of land along Michigan Road where it once planned to build a store. (Photo by Heather Lusk)

The 22.74 acres owned by Walmart on Michigan Road is for sale with a price tag of $7.5 million.

“After careful consideration, we have decided not to pursue a store at that location,” Walmart spokesperson Anne Hatfield stated in an email. “The retail landscape has changed since we first proposed a store. We look forward to serving customers at our nearby locations.”

Steve Maines with ADM Commercial Properties in Muncie is the realtor representing several of Walmart’s properties, including this one. It was listed in early June.

There has been some interest in the property, according to Maines, although nothing significant.

The empty lot was the source of a legal battle between Walmart and the Town of Zionsville for 10 years, culminating a year ago when a Boone County Superior Court judge reversed the Zionsville Plan Commission’s 2008 decision to deny Walmart’s plans to build.

The battle began in 2006 when the plan commission initially denied the plans, citing that it did not have jurisdiction because one-third of the property is in Hamilton County.

In 2008, Zionsville enacted a “big box” ordinance limiting the size of freestanding commercial buildings to 60,000 square feet. Integrated centers are limited to 125,000 square feet without an approved variance.

Although the town did not have a comment on the property’s sale, officials stated in an email “anything wanting to locate there would have to comply with Town Ordinances.”

The portion of the property in Boone County is zoned B-2 Commercial, and Zionsville’s Comprehensive Plan recommends commercial development for the site.

Opinion: Not the same old runaround

City of Noblesville eyes annexation of land for Midland Pointe
Share. Twitter Facebook Pinterest LinkedIn Tumblr Email
Previous ArticleOpinion: We can and must do better for healthcare – together
Next Article Zionsville Town Council thanks Papa for years of service
Follow us on Social Media