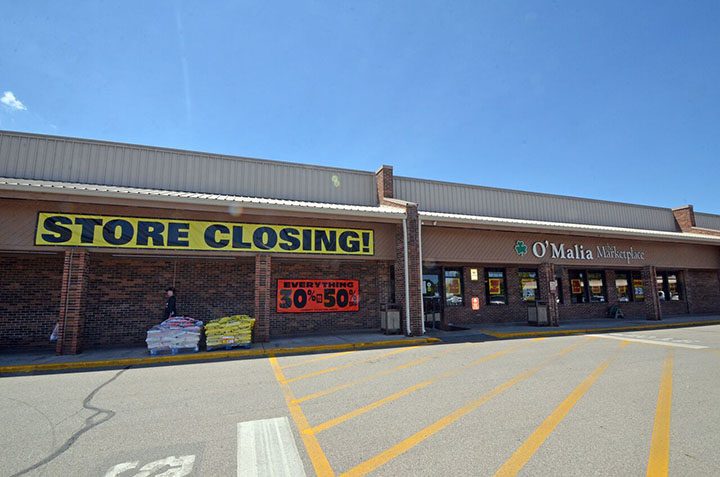 Residents of Brookshire and nearby Carmel areas are mourning the loss of a favorite neighborhood grocery store, O’Malia Food Market.

This final remaining O’Malia store, now owned by Marsh Supermarkets, is set to close on July 8. It will close sooner if it runs out of inventory. Now in the process of liquidation, many shelves in the market are bare and all remaining items are marked 30-50 percent off.

At 126th and Gray Road, this particular O’Malia store was the sixth location of the small local grocery chain, founded by Joe O’Malia. The very first O’Malia store was at 10450 N. College Ave and opened in 1967. 10 total stores were opened within a 30-year span, four of those in Carmel. In 1981, O’Malia Investment Company was formed in order to build the strip mall at 126th and Gray. “Store #6” opened in early 1982, and several other local tenants filled the rest of the shopping center.

“After owning the other locations, my father envisioned paying rent to himself,” said Dennis O’Malia, co-owner of O’Malia Investment Group.

In 2001, nine O’Malia locations were sold to Marsh Supermarkets. However, O’Malia Investment Company remained the landlord for the 126th and Gray location. Marsh’s recent filing of Chapter 11 Bankruptcy posed an inquiry – what would happen to this neighborhood grocery store?

On June 13, Marsh announced the sale of 26 of its 44 stores, including eight Indiana locations. After a bidding war, the stores were split between Topvalco, a Cincinnati-based Kroger subsidiary, and Ohio-based Fresh Encounter. The remaining unsold locations, including O’Malia, are set to close upon liquidation.

As of press time, a new tenant to replace O’Malia has not been announced.

“We have hired Duke Hardy to manage the center,” Dennis said. “We are actively speaking to different entities to take that space. It’s very early in the conversations with these entities. It’s too early to say what’s going to happen.”

Residents remember O’Malia over the years

Neighborhood message boards are abuzz with chatter about the closing of O’Malia. Residents of nearby neighborhoods are wondering what will take its place, where the current employees will go, and if any replacement business could possibly keep the small-town feel of a neighborhood grocer.

For Rosemary Pettinger, the opening of O’Malia Store # 6 in 1982 was an asset to the area and her family’s life.

“I lived in Eden Estates at that time,” Pettinger said. “When they put that store in, it was a real blessing because it was right around the corner from our subdivision.”

According to Pettinger, O’Malia had a childcare corner with an appointed babysitter who would entertain your kids while they were shopping, among several other unique amenities including a coffee corner, fresh bakery and carpeted floors.

“It was so cozy. They had a wonderful coffee corner with free coffee and a fireplace,” Pettinger said. “It was the best vanilla hazelnut coffee from Cadillac Coffee Company. I would meet my girlfriends there we would sit in the corner and chat, and then we would do our shopping.”

Not only was the store carpeted and quiet, said Pettinger, but employees were helpful and went out of their way to provide good service. A few things changed over the years, and the store expanded. When Marsh took over in 2001 some of the unique features were removed, but O’Malia was allowed to keep its neighborhood feel. According to Pettinger, the O’Malia friendliness and service has persisted.

“I can’t say enough for the original concept,” Pettinger said. “I have fond memories of that O’Malia store and it will be greatly missed. You just don’t find the neighborhood stores like that anymore.”

The O’Malia store itself is not the only thing that will be missed. Employees like Kenny Newell have been a mainstay in the neighborhood for years. 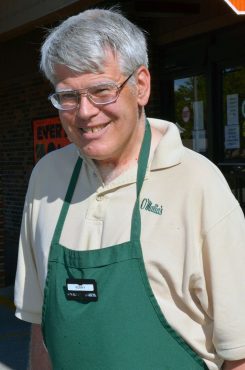 “Kenny never has a bad day. There’s always a smile on his face, and he always asks about you,” said Debbie Eckstein, 16-year Brookshire resident and O’Malia customer. Eckstein works next door as Lead Pharmacy Technician at CVS Pharmacy. “

“This September would have marked 28 years (at O’Malia),” Newell said. “It’s hard to believe. It goes by quickly.”

Newell moved with his family from San Antonio, TX to Carmel in the summer of 1989. Shortly thereafter, he began working at an O’Malia at 116th and Range Line Road and has worked at three other locations since. As the O’Malia stores closed, Kenny persisted as a grocery bagger and wound up at the 126th and Gray location.

“I love the people here,” Newell said. “I keep in touch with people I have worked with over the years.”

Newell said that he was happy to keep his job when O’Malia was sold to Marsh in 2001, and didn’t notice too many changes. With the store now closing, he will stay on at O’Malia until its final day open and then has potential plans to start at Broccoli Bills specialty grocery in Noblesville.

According to Newell, an accident left him with vision difficulties at the age of two. He now relies on his parents for transportation, but stays busy with his job at O’Malia.

“I love my job,” Newell said. “I was hoping that we would get bought out so that we could stay open.”

“I think he’s a great employee. We’re all so happy he found a new job,” Eckstein said.

Newell says that if something opened in place of O’Malia, he would consider applying.

“I have made some really good friends here,” he said.