You are at:Home»Current in Carmel»Carmel Community»‘Antiques Roadshow’ appraiser visits The Barrington 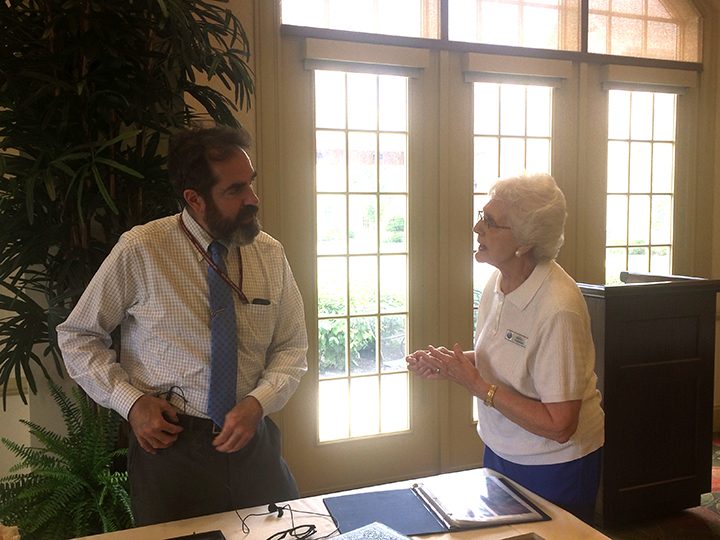 Gary Piattoni warns every audience not to be too disappointed if they learn their antique is really not all that valuable.

Piattoni, who has worked as an appraiser on “Antiques Roadshow” on PBS for 21 years, made a special private appearance at The Barrington of Camel, a senior living community, June 7.

Piattoni said when he does a private event like the one at The Barrington, he tries to limit it to 50 or 60 people with items in a two-hour session.

“I try to keep the event entertaining, but it moves along,” Piattoni said. “Some items require more time than others. I always enjoy something that has talking points.”

When he was younger, Piattoni collected World War II items.

“I’ve done a lot of military items for the ‘Roadshow,’ and I’ll buy a piece or two if I see something interesting,” Piattoni said. “I don’t collect much anymore.”

Piattoni, who will frequently appraise everything in a house, appraises everything from furniture to fine arts to collectibles.

Marilyn Halvorson, a Barrington resident, brought an item to each session, bringing a Homestead purchase document from South Dakota that was her grandfather’s. The document was signed by President Woodrow Wilson. Piattoni told Halvorson there is not a great demand for Wilson’s autograph and later told her it was worth approximately $200.

“I chuckled when he said it would be worth more if it was Abraham Lincoln,” Halvorson said. “He’s great, he makes it fun. He tells you at the beginning, don’t be offended if you find it’s not worth much.”

Halvorson, who brought a family pocket watch to the afternoon session, moved to The Barrington from Michigan two years ago. Her son is former WISH-8 TV anchor/reporter Eric Halvorson, who now works for Kroger.

“There was an interesting collection of hand-written sermons by a preacher from the 18th century,” Piattoni said. “There was a neat trunk from Norway from the 19th century.”

In addition to his appraisals, Piattoni explained how the “Antiques Roadshow” is taped and how he alerts the producer if there is an interesting item and he thinks the person who owns it will do well on camera. He doesn’t tell people what it’s worth until they film.

“We want the original reaction to be honest and exciting,” Piattoni said.