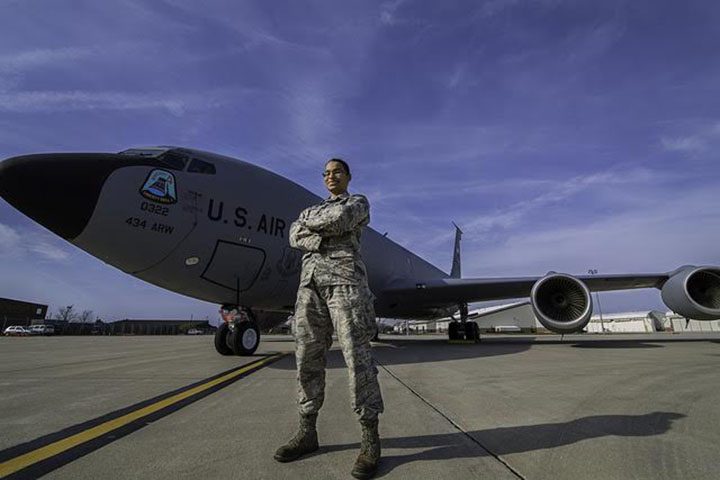 Julia Person with the KC-134 Stratotanker she is tasked with maintaining as a crew chief in the U.S. Air Force. (Submitted photo)

Julia Person has been hard at work this year, serving as a full-time crew chief for the U.S. Air Force Reserves and attending IU-Kokomo as a part-time student studying history and political science.

“It’s cool to do something out of the ordinary,” Person said.

Person, 32, said she commutes more than 500 miles a week between her home in Carmel, the base in Peru and school.

As a crew chief, Person is tasked with the day-to-day handling and servicing of the airplanes. She maintains a KC-135 Stratotanker aircraft.

“I like having a tangible result of what I do,” she said. “I take care of the aircrafts and I get to see them fly and land successfully and complete missions. To me, that’s really rewarding to have a direct line of sight to what I do.”

Person said she is elated about her May 9 commencement. Upon graduation, she will have a commission as an officer in the reserves. She said within the next five years she plans to earn a master’s degree in library science and one day pursue a career as a military or government archivist.

Person grew up in Battle Creek, Mich., and moved to Carmel from Noblesville in 2010. Through her work as crew chief, she has traveled to Okinawa, Hawaii, Guam, Germany and England.

“I have all sorts of experiences under my belt I wouldn’t have otherwise had,” Person said.

Person has several hobbies, including knitting, singing and reading, but she often doesn’t have time in her busy schedule to do them. Her typical day consists of working out at the gym, attending school and going to work.

Upon graduation, Person said she will be the officer in charge of quality assurance at Grissom Air Force Base.