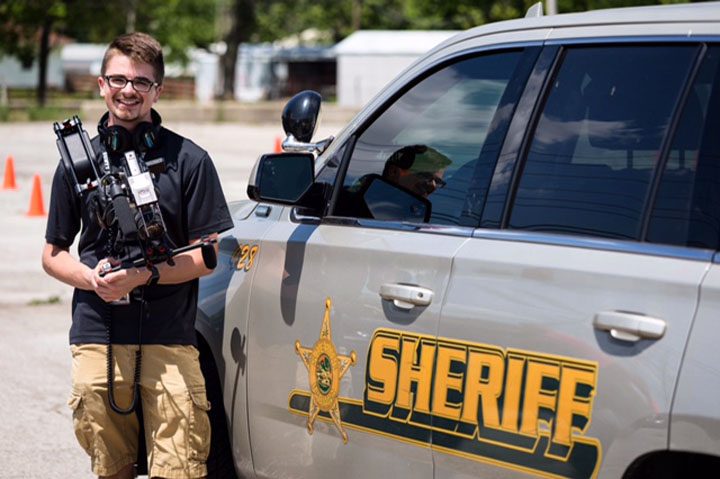 Ryan McClain has had a busy and productive summer.

The 2015 Carmel High School graduate and Ball State University student has been providing production support for WRTV-6 in the studio for 15 to 20 hours a week and as a videographer for the Delaware County Sheriff’s Dept.

McClain is producing a 30-minute show featuring the Deputies of Delaware County on YouTube and the Sheriff Dept. Facebook page.

McClain made contact when working as a videographer on a 30-minute documentary with fellow BSU students on meth problem in Delaware County in the fall of 2016.

“After that the Sheriff (Ray Dudley) came to me and said he would like to have ‘Cops’-style show to show how cool we are and be more open to the public,” McClain said. “They gave me their ideas about the show and asked for my ideas

McClain started working on show in November.  The first episode came out in May.

McClain said Sheriff Dudley made him a special deputy for the county.

Joe Krupa, the Delaware Sherriff Dept. public information officer, and McClain do the production of the show.

“I’ve gone on drug busts, SWAT hits and traffic stops,” McClain said. “Taking calls from vehicle checks to burglaries. There is always a mix of things happening in Delaware County.  Sometime you go in and get lucky to get something for the show and a lot of times you go in and there is not much going on.”

McClain was active in the TV program at CHS and decided to major in telecommunications at BSU.

McClain said he has made contacts through Ball State so he is able to get freelance working filming weddings or other events. McClain, who was in the drum line for CHS Marching Band, also shoots video of marching bands.