Being part of the national championship team is a memory Ben Clevenger will forever treasure. 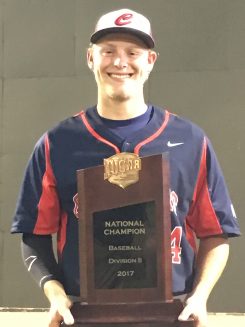 “It was awesome,” Clevenger said. “(Kankakee) never won it before, and my coach (Todd Post) was only there once before (in the World Series) in his 17 seasons. He would always compare us to the 2009 team, and we really took it upon ourselves to win the whole thing.”

The seventh-seeded Cavaliers lost the first game and came out of the losers’ bracket to win the next six games and the championship, beating No. 4 seed Mercer County (N.J.) 11-5 June 2 to win the National Junior College Athletic Association Division II Baseball World Series in Enid, Okla.

“I’d say it was my best experience,” Clevenger said of winning the title. “The biggest thing was overcoming the adversity of losing the first game. We never put our heads down. We never thought we were going to lose. We took it one game at a time and it ended up turning out great for us.”

Clevenger, a right-hander who was 6-1 this season, was in the starting rotation all season and pitched in relief in the playoffs,  Post said.

“Ben picked up a big win in relief versus Parkland College at the World Series (May 31) as he retired all six batters he faced, striking out two,” Post said. “Ben had a solid freshman season and came up big for the Cavaliers out of the bullpen during the World Series.”

Post said Clevenger is getting some great experience this summer, which will help him as he returns to the starting rotation at Kankakee for his sophomore season. Clevenger is pitching for the Grand River (Mich.) Loggers in the Great Lakes Collegiate League.