Caroline Ahn’s hope is her first album provides comfort to listeners in need.

“Since the music is very soothing and calming, we would like to use this album to touch people’s hearts and heal people who are ill, who are discouraged, who are depressed, who are lost and who are lonely,” Ahn said. 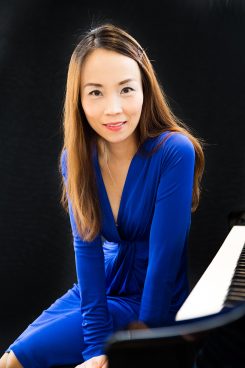 The Carmel resident composed “Classical Ballad: The First Album,” a collection of piano solos. The pianist, Doyeon Diane Kim, a former student of Ahn, performs the music. While Ahn was getting her doctor at Indiana University she was Kim’s instructor.

Ahn said it took her approximately six months to write nine songs for the album.

The album was directed and produced by a Korean Agency called The Classic Art by CEO Yohan Shin, Ahn said.

“When he suggested me to write the pieces for the CD, he really wanted to make a classical album that’s more applicable or approachable for ordinary people,” Ahn said. “Something that’s easy to listen and everybody can enjoy it.”

Proceeds from the two-day event served as fundraiser for the Sound of Hope. The traveling orchestra group, which was started approximately two years ago, visits retirement centers, orphanages, assisted living facilities and hospitals around Indianapolis-area about once a month.

For more on Sound of Hope, visit sohstory.com. For more on Ahn, visit carolineahncomposer.com.