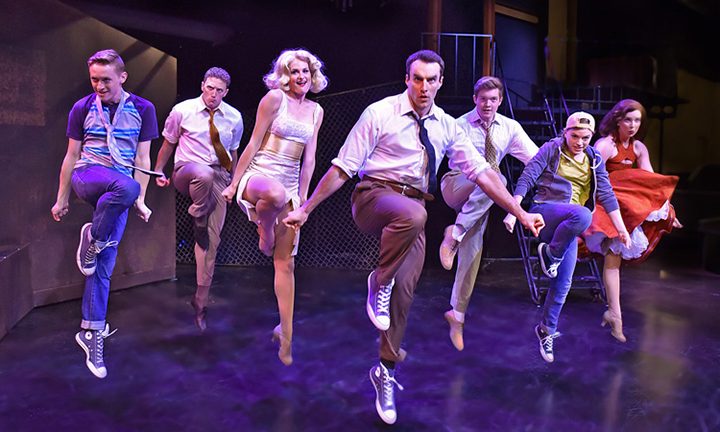 When the Beef & Boards Dinner Theatre team returned from a three-day talent search to New York City earlier this year, it returned with a daunting task for director Eddie Curry and choreographer Ron Morgan.

The duo was to take some of this newfound talent and ready it for the theater’s production of  “West Side Story,” which was to open just 10 days after “Ring of Fire” was to close.

“The difficult part was putting together a schedule that utilized all of the actors and production team to their fullest,” Morgan said of the challenge. “It’s a complicated puzzle to get all the music, blocking, choreography and tech completed in time.’’

If the Aug. 17 performance was any indication of how things went, consider the puzzle solved. A near-capacity, opening night audience witnessed a brilliant production that moved without a stumble – well, there was one humorous glitch, but more about that later.

Of the 19-member cast, 13 new faces made their debut at the Indy northwest side theater as they joined B&B veteran Doug King and five other B&B repeats. It helped a little that three of the newbies have performed in “West Side Story” before.

“These (new) actors are all experienced professionals,” Morgan said. “ It’s nice to blend new blood with our talented local actors.”

Heading the list of newbies on opening night were Courtney Cheatham as Maria and Glenn DeVar as Tony. Maria and Tony are at the heart of the story; they are Romeo and Juliet of the Shakespeare classic transposed to the gang-ridden streets of 1950s Manhattan, dominated by the Sharks and the Jets. Tony is a Jet. Maria is sister to Bernardo, a Shark, played smoothly by Dan Higgins. The two teens fall in love at first sight at a gym dance.

While holding the audience firmly with their acting skills, Cheatham and DeVar sailed through the Leonard Bernstein/Stephen Sondheim classics, which have made “West Side Story” sustain its power since debuting in 1957 with memorable tunes such as “Tonight,” “Maria,” “I Feel Pretty,” “America” and “Somewhere.” If any audience member didn’t leave the theater that night with at least one of those tunes rolling around in their noggins, they need to check their pulse.

One of the coolest songs of the night was the low-key offering of  “Cool,” led by Riff (Ben Cullen), complete with ’50s finger snaps.

A special nod goes to Musical Director Terry Woods for leading his band through the ebbs and flows of the show. Woods is quite familiar with the musical’s score, having previously toured Europe with the show.

While Cheatham and DeVar were clearly the stars, the big scenes in which the stage was flooded with the ensemble, such as the gym dance and ballet sequence, were visually and audibly irresistible.

Even the veteran King grabbed his time in the spotlight with a hilarious portrayal of the nerdy dance chaperone Glad Hand and the sleazy cop, Lt. Shranke. Another B&B returnee, Lew Hackleman, is celebrating his 61st year in theater in the role of store owner Doc, who tries to bring peace to the gang dispute.

Visually, the production was brilliant with period costumes (a lot of blue jeans), particularly the colorful and frilly dresses of female Puerto Ricans Maria, Anita (Marisa Rivera), Rosalia (Sally Scharbrough) and Consuelo (Jackie Kosoff). Accent – both Puerto Rican and those of white teens of the ’50s (remember the popular term daddy-O?) were dead on.

Oh, and about that aforementioned stumble? It happened in a scene where the spunky, tomboyish Anybodys (Grace Atherholt) failed to successfully make a leap from the stage floor to a second level in the backdrop that had an exit door. When she made the misstep, Action (Adam Shaff) went off script and asked, “Are you okay?” which is what someone would usually ask in this case.

Anybodys answered with a short, embarrassed laugh and said, “Yeah. Thank you.” The audience responded with an appreciative and understanding laugh.