You are at:Home»Current in Carmel»Carmel Community»INDOT gathers feedback on future plans for I-465, I-69 interchange 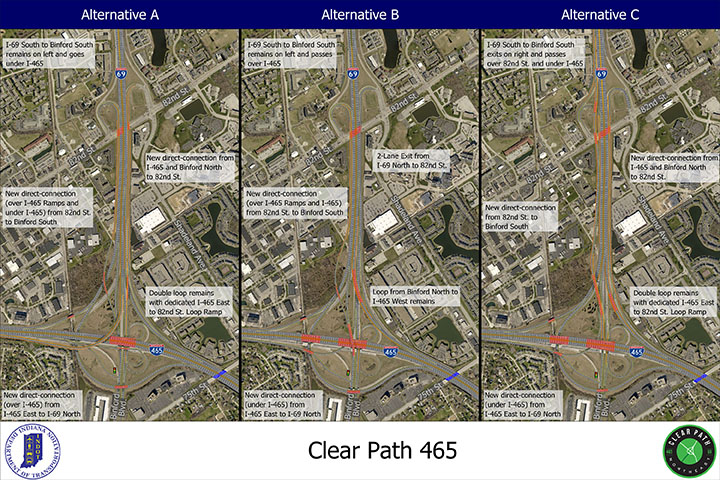 INDOT presented several possibilities for the future of the I-465, I-69 interchange. (Submitted image)

“The goal of this project is to maximize safety and minimize congestion throughout the interchange,” said Myers, communications director for the Greenfield district.

The proposed Clear Path 465 includes added travel lanes on I-465 from the White River Bridge (approximately 2.4 miles west of I-69) to Fall Creek (approximately 2.15 miles south of 1-69) on the northeast side of Indianapolis. Portions of I-69 are set to be reconstructed between I-465 and 82nd Street to accommodate a modified I-465 and I-69 interchange configuration.

The open house was one of the first steps of the project. Its objective was to provide an opportunity for those in attendance to give input on the environmental process, discuss key issues, promote collaboration and build understanding and support through the project.

Three alternative paths were displayed on the boards around the HCS gym.

“The biggest difference between the alternatives is really how we split some of the lanes and how we utilize some of the movement,” Myers said. “For example, eastbound traffic moving northbound to 69 will have a single over-ramp or under-ramp. But traffic will have to decide before it even gets to 69 whether the drivers want to get off on 82nd (Street) or not. That eliminates that weaving movement, which is great for safety and speed. But what we don’t know yet is how people will get to 82nd, so that is where the alternates come in.”

Between 2011 and 2013, there were more than 1,000 crashes in the project area. According to INDOT, contributing factors include congestion, excessive delays and inadequate weaving distances.