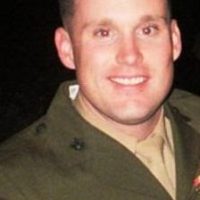 “It’s grown not because of anything Ty and I did particularly well,” Smid said.

The tournament began when Kevin Rankel wanted to create a scholarship for his son, Sgt. John Rankel, a Speedway resident who died in Afghanistan in 2010.

“He was looking for a way to honor his son,” Smid said. “He came across the Marine Scholarship Foundation and thought it would be a good fit if he could combine efforts. We thought we would honor John Rankel. Putting the face of that Marine with our tournament and saying we were raising money for a scholarship, the level of interest just skyrocketed. That really got people interested. We switched from Twin Lakes (Golf Club) in Carmel to Pebble Brook, which is a 36-hole course in 2011.”

After that tournament, Smid said they decided to make the tournament in honor of a different Marine each year.

“We’ll earmark those scholarships for kids from Indiana or kids that are going to attend school in Indiana,” Smid said.

Sgt. Bradley Atwell, from Kokomo, was killed in action in Afghanistan Sept. 14, 2012, which will be five years on the day of the tournament.

“Working with these Gold Star families who have lost their sons is just tremendous,” Smid said. “Our committee now is made up largely of families whose sons have been honored in previous years.”

“I say more than half of the golfers are there every year,” Smid said. “I’ve never met anyone who hasn’t said this is the best golf tournament (they’ve) ever played just because of the meaning behind it and everything else.”

This Marine Corps Scholarship Foundation will award $7.4 million in scholarships to 2,300 students, including 36 from Indiana.

Registration begins at 10 a.m. with the range and putting green ceremony open. The opening ceremony is 11:30 a.m., followed by a shotgun start at noon. The dinner is at 5 p.m., with the awards and closing ceremony set for 5:30 p.m.