You are at:Home»Current in Carmel»Carmel Community»India Business Council leader receives Sagamore of the Wabash

Gov. Eric Holcomb on Aug. 20 gave the prestigious Sagamore of the Wabash honor to Raju Chinthala, a Carmel-based speech pathologist and founder of the Indiana-India Business Council. 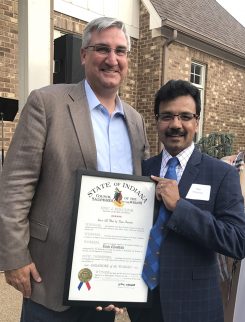 In addition, the City of Indianapolis issued a proclamation to honor Chinthala for his work for the business community.

“For nearly a decade, Raju has dedicated his time and talents by serving on several boards, committees and task forces to promote business and civic advancement in the City of Indianapolis,” the proclamation states.

Chief among his accomplishments in 2017 was his role in luring the India-based company InfoSys to relocate to Central Indiana, creating 2,000 jobs by 2022.

“I’m proud to have played a role in bringing those jobs to Indiana,” he said. “Even though the council is one year old, we’ve accomplished more than I could have imagined. We’re creating a bridge between Indiana and India, and in the future we hope to make that bridge even stronger.”

Chinthala has been busy lately. On Aug. 20, he played a role in organizing India Day in Downtown Indianapolis at Monument Circle, which included a parade, Indian cuisine, live music and more. He also was involved with Heartland Film Festival’s Cultural Journey: India, an event from Aug. 17 to 20 that celebrated Indian movies and culture.

Chinthala has been active in local politics in Carmel and Indianapolis and traveled with a delegation of Indiana leaders to India to meet with businesses. As president of the Indianapolis Hyderabad Sister City Committee, he said he’s tried to build relations between Central Indiana and India. He’s expressed interest in running for office and threw his hat into the ring when former City Councilor Carol Schleif moved away and there was a caucus to replace her. Tony Green ended up winning that caucus.