You are at:Home»Current in Carmel»Carmel Community»Carmel’s Sandy Hughey named USO of Indiana’s Volunteer of the Year

Carmel resident Sandy Hughey received the 2017 Volunteer of the Year award last month at the United Service Organizations of Indiana Five-Star Gala at the J.W. Marriott. 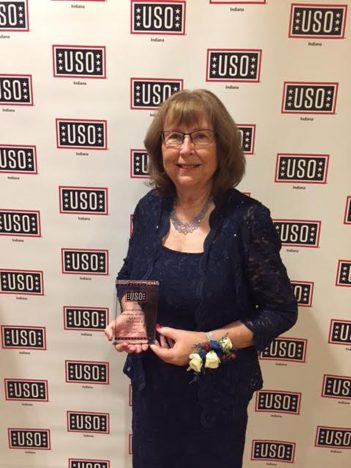 Carmel resident Sandy Hughey recently received the USO of Indiana’s 2017 Volunteer of the Year award. Hughey has been a volunteer at the USO’s Indianapolis International Airport facility for the past 15 years. (Submitted photo)

During her 15 years as a USO volunteer, Hughey has been a key team member at the USO’s Indianapolis International Airport facility, which assists more than 10,000 soldiers each year. She works on the facility’s hygiene project, serves as inventory management team leader and care package specialist, is a part of the Families of the Fallen Response Team, coordinates the CarmelFest military hospitality tent, heads the center’s holiday decorating project and maintains the volunteer photo album.

As a volunteer, Hughey prepares care packages to send to soldiers stationed throughout the world, including Afghanistan, South Korea and Kuwait, assists grieving family members of fallen soldiers as they go through the airport and ensures the USO airport facility is fully-stocked for the soldiers that come through.

“We’re called a home away from home,” Hughey said. “We provide everything for the soldier.”

Hughey said she respects the soldiers and volunteers her time at the USO to show her appreciation for the sacrifices they have made.

“It’s quite an honor to be recognized for a service you love doing,” Hughey said.

Although she deeply appreciates being recognized by the USO, Hughey said the service men and woman are the real heroes.

A member of Cornerstone Lutheran Church, Hughey also headed the “Christmas in July” care package project through the church’s military ministry. Through the project, Hughey assisted in sending more than 100 care packages to USO centers overseas.

Hughey is a retired real estate broker and previously co-owned Hughey Boats, Inc. with her husband. The Hugheys have three daughters, 10 grandchildren and are expecting their first great-grandson this month.

The mission of the USO is to strengthen America’s military service members by keeping them connected to family, home and country throughout their time in service. The nonprofit organization was started in 1941 during World War II by President Franklin D. Roosevelt as a way to unite several service associations into one organization to help lift morale and garner support for American troops. For more, visit uso.org.