You are at:Home»Night & Day»Sammy Terry: The Enduring Legacy of a Hoosier Icon 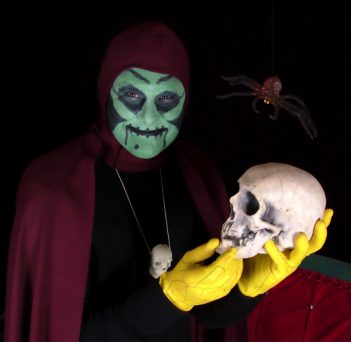 Does this bring back memories? It’s Friday night in the 1970s or ‘80s, depending on your age. It’s 11:30 p.m. and local newscasts have just ended. You and your siblings and perhaps your friends are camped in front of a pre-cable, four-channel television. Preparations have been made: Popcorn, check. Soft drinks, check. Pillow and blankets, check. Now, the voice of the announcer chimes in with the station identification: “WTTV, Channel 4.” As the screen fades to black, you hear the sound of an eerie wind and a ghostly voice recite a chilling monologue that ends with, “It’s time. . .for. . .Sammy Terry!” Then, you watch, with a fearful anticipation, as the lid to the coffin creaks open and a cowled figure rises with a fiendish, ghoulish grin. What comes next is the stuff of local legend: A sinister, blood-curdling laugh that has spooked generations of Hoosiers. Face painted in horrific make-up, the figure introduces himself as “Sammy Terry” and welcomes you to “Nightmare Theatre!” And so begins a fun-filled night of scares and chills, as Sammy Terry hosts a marathon of horror films, with Sammy offering commentary, jokes and guests with his sidekick, “George, the Spider,” and other recurring characters, such as “Ghoulsby, the butler.”

For those of us who grew up in central Indiana during the years 1962-89, this was certainly a familiar scene, if not a weekend ritual. “Sammy Terry’s Nightmare Theatre” marked the beginning of the weekend, and many looked forward to those late-night marathons featuring everything from classic horror films to laughably low-budget, B-grade fare.

Created by Robert “Bob” Carter in 1962, the character of Sammy Terry hosted Nightmare Theatre until 1989. The character continued to make guest appearances in commercials and at Halloween-related events. Today, the characters remain extremely popular in the horror community, thanks to Carter’s son, Mark, who took over the role in 2010. Bob Carter passed away in 2013.

“There was never a feeling of grooming me for the role,” said Carter, a Fishers resident. “I never imagined that I’d take over the role. My feeling was that was dad’s work, and that the character would die with him.”

That changed in 2010, when the town of Brownstown requested Sammy Terry merchandise for a local event.

“Dad asked me to take the merchandise, and there was this huge crowd,” Carter said. “We sold out of everything, there was nothing left. Dad realized that there was still a following and a fan base for

Sammy Terry, so he asked me if I would take on the role.”

Of course, Carter had gained experience working alongside his father as both “George and “Ghoulsby.”

“I remember that I would be excused early from school on Fridays during my middle and high school years,” Carter said with a laugh. “I would play George and Ghoulsby.”

For Carter, the best part of playing Sammy is the live appearances.

“I really feel a sense of gratitude and enjoyment when I meet the fans,” he said. “There are people there with tears in their eyes because Sammy represents a fond memory for them or memories of happy times with friends or family. I’m honored to be a part of that. I’m sometimes asked if I will ever change, upgrade or update the character. Based on Sammy’s fan base, that would negate their memories. I want to honor those memories as well as honor and preserve my dad’s legacy. The live events are filled with people who grew up in Indiana, and Sammy is a part of that Hoosier heritage. Sammy Terry is a Hoosier, through and through.”

Be sure to like the Sammy Terry Fan Page on Facebook. There will be a Facebook live event on Halloween night, with Sammy hosting the silent film version of “Dr. Jekyll and Mr. Hyde.”

Visit sammyterry.com for more on Sammy.