Debbie Duke started The Little Lamb Christian School as way of bringing her own children to work and observing what they were leaning. 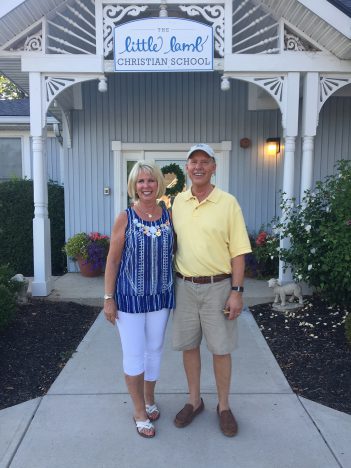 Debbie and Chuck Duke pause in front of their school, which is celebrating its 30th anniversary this year. (Submitted photo)

“My major at Purdue was child development, so I was going to be a kindergarten teacher,” the longtime Carmel resident said. “I didn’t find a kindergarten teaching job and I worked for a manufacturing company and got my accounting degree. I started having children and I took them with me to work.”

However, by the time her third child, Kayley, was born, she decided to work at a preschool because she would know what they were learning.

“I wanted to make sure they had Bible time,” Duke said. “At that time schools did Transcendental Mediation and some of the New Age stuff with the children, that really bothered me. I got a loan and we built the building.”

Now her grandchildren are attending. The Little Lamb, which is a preschool child care facility, is celebrating its 30th anniversary this year at 1609 E. Greyhound Pass, Carmel. The capacity is 104. After-school care is offered as well.

“We got pretty filled up right away because nothing was around at first,” Duke said. “Back then, the licensing was different. We could have more children, and we had 126 then.”

There are approximately 20 employees. The school, which opened in August 1987, previously had kindergarten and all five Duke children at least went through kindergarten at the school.

While Duke goes in every day, there is a director and assistant director to take care of the day-to-day duties. Her husband and co-owner, Chuck, a self-employed marketing consultant, helps with odd jobs.

Duke said she believed she would stick with the school even after her five children were beyond the pre-school age.

“I always felt it was more mission-based,” she said. “I wanted other families to be able to go and have Bible time every day and learn character training. I never thought it was something I was going to stop doing.”

Chuck said part of the school’s success is the curriculum has been consistent from the start.

“We teach phonics, science and Bible, and that was a niche that wasn’t filled,” Chuck said.

“It starts in the 1-year-olds class where they are learning numbers and phonics,” Duke said.

The biggest change is technology, adding the internet and Facebook page where the teachers communicate with parents.

Daughter Kayley Davis handles marketing for the school. Her two older children went to Little Lamb, and two younger ones are enrolled now.

The school is offering $300 off the child’s first month of tuition for new families during this year.