You are at:Home»Current in Fishers»Fishers Community»HSE robotics team advances to regional finals in Fargo

The Hamilton Southeastern Engineering Design and Development class placed fifth at the  Falcon Best Robotics Competition 2017 Oct. 28 at Bowling Green University. The win advances the 33-member senior class to the Nov. 29-Dec. 1 regional finals in Fargo, N.D. The FBRC is part of the BEST program that promotes the growth of local competition sites across the U.S., maximizing the number of future engineers, scientists and technical professionals. 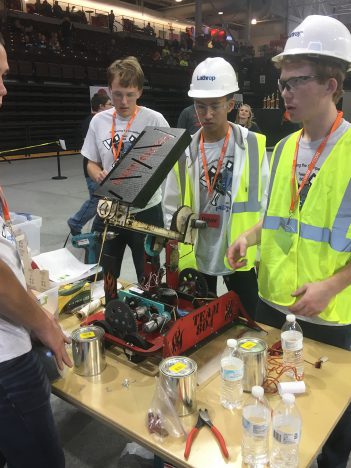 The regional finals utilize the same theme as the previous competition. Crossfire focuses on fire and rescue teams. Each team builds a robot that competes in games against other teams’ robots.

“We are taking some pieces of the robot we built previously, but we will be making some changes (to make them) more successful,” said Sara White, one of the co-team leaders.

The team is eight weeks into its their robot.

The team also has to present a marketing campaign.

“We actually present ourselves as a corporation. We are called the Royal Fire Dept. We talk about strategies and how we use our funds,” White said.

The group has high goals for the competition.

“We obviously want to place in the top three. Those teams move on to the championship in Dallas, Texas,” White said. “We also want to win the BEST award at the competition. It’s a culmination of your team’s utilization of the design process.”

The teams are given some supplies but purchase the majority of what they need.

“One of our costs is supplies, but our other big costs are exhibit cost and travel,” White said.

The group has started a GoFundMe page to assist in fundraising. For more, visit gofundme.com/hse-best-robotics.