You are at:Home»Current in Carmel»Carmel Community»Sommer to lead Carmel Dads’ Club soccer programs

When Indy Eleven was searching for its first coach and director of soccer of the North American Soccer League franchise, it turned to Juergen Sommer. 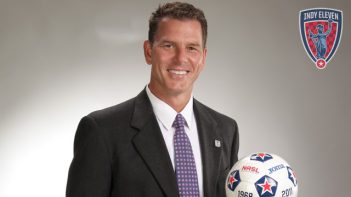 Now Carmel Dads’ Club is doing the same, recently naming Sommer as the director of soccer operations for Carmel FC Soccer, the club’s travel program. He also will play a role in consulting for the recreation program.

Sommer is a former Indiana University standout who participated in two World Cups for the U.S. National Team in 1994 and 1998,

“My kids all participated in soccer, baseball, basketball and football,” said Sommer, who moved to Carmel in 2002 after retiring from pro soccer. “We’ve been around the organization for quite a while. I’m just excited to be inside now and overseeing the vibrant and growing soccer program they have.”

Sommer, who was a Major League Soccer All-Star, was let go as Indy Eleven coach during its second season in 2015.

The Carmel United Club had partnered with the Carmel Dads’ Club. But Carmel United paired with Westfield Youth Soccer Club to form Indiana Fire in 2014.

“That created the opportunity to be filled by Carmel FC, which is the new travel program through the Dads’ Club,” Sommer said. “I’m tasked to make that better. It’s an exciting opportunity for a lot of growth here.”

Carmel FC is in the third year of a five-year plan, Sommer said.

“The idea is to bring them into the program through the recreational soccer opportunities through the U7 and U8 teams and give them the opportunity to learn the sport and participate with their friends,” Sommer said. “The Carmel Dads’ Club can now offer soccer from a young age all the way through. They’re really trying to create a great feeder program for the high school.”

Sommer said he started his coaching career volunteering in CDC. Being on CDC teams has been some of the best experiences for his two sons, he said.

“They loved it,” Sommer said. “That’s our focus, value for money and a great family sports experience, so the kids enjoy and come back. We have great facilities because we have a great partnership with the Carmel Clay Schools system. We have access to a lot of amenities that other clubs don’t have.”

There are nearly 600 boys and girls players in Carmel FC.

“Those numbers have grown steadily,” Sommer said. “It’s really family oriented and all about the player having great experiences.”

Sommer was a volunteer assistant soccer coach with the Carmel High School varsity and junior varsity boys teams this fall. He said four or five of the top players on the JV came through Carmel FC. His younger son, Noah, was a sophomore JV soccer player.

Sommer’s older son, Tommy, was a standout pitcher for CHS and now is a freshman baseball player at IU.