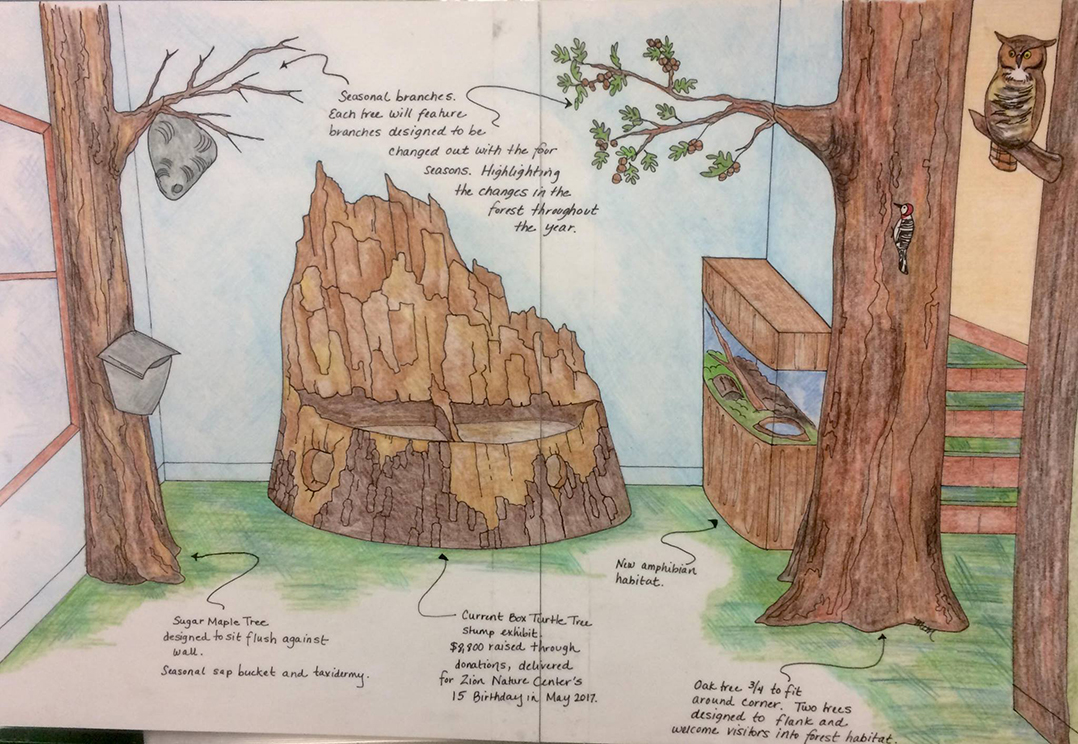 The Zion Nature Center is raising funds to enhance its forest exhibit. The new elements will be designed so they can be moved to a new nature center. (Submitted photo)

The Zion Nature Center celebrated its 15th anniversary in May with a special addition.

“We celebrated that milestone with the completion and installation of our first ever professionally built exhibit, the box turtle tree stump,” Zion Nature Center naturalist Mindy Murdock said. “The turtle exhibit is a true celebration of all the support and investment the Zionsville community has shown to the Zion Nature Center over the past 15 years. We ended up raising more funds than were needed to make the exhibit come into existence. We didn’t want the money that families and organizations had donated just sitting until the new Nature Center was built, and we wanted to keep that momentum and interest in what the Nature Center was doing.”

There is no timetable for when a new center will be built, but it is still on the town’s radar, Murdock said.

However, Murdock said the center is continuing to raise funds to bring two seasonal trees from a sketch on paper to reality.

“The two trees are a part of our forest habitat that we have planned for a section of the new Nature Center space,” Murdock said. “The tree stump was one of those components, and there is still a future bee hive exhibit that will be designed. The two trees will be constructed to appear as if a sugar maple and red oak grew straight through the Nature Center space.”

Murdock said the center needs to raise $5,000 to cover what is still needed to begin construction of the two trees.

“But more than just raising funds, we also looked at this fundraiser as a great chance to help spread the word about the Zion Nature Center and our park programs, so we designed a limited edition tote bag as a gift for those that donated a minimum of $50,” Murdock said. “The tote celebrates Zion Nature Center’s 15th anniversary and currently is only available to donors.”

Murdock said Nature Center visitors who have seen the new tree stump can get an idea of how lifelike the two trees will be.

“In our current space, they will flank the new turtle exhibit when completed, but will be constructed so that we can disassemble and move into the new Nature Center when it is built,” she said. “The trees will be designed so that Nature Center staff can change out parts of the tree with the changing seasons, including branches that will show buds (spring), changing leaves and seeds (fall), bare branches (winter) and green leaves (summer), areas to display some of our birds and other taxidermy, and in the case of the sugar maple we would be able to attach a spile and metal bucket during maple sugaring time.”