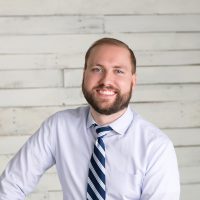 After traveling the nation promoting stock car racing, Robbins began to disconnect from Hamilton County. But after encountering roadblocks while pursuing his childhood dreams, he refocused his entrepreneurial background and found his way to HCLA.

“I had to step away from a few things I was passionate about in the community, and I really missed it,” the 35-year-old Carmel resident said. “I was kind of at this crossroads of a childhood dream wondering where I was going to go and what it all means. I got coffee with Mo Merhoff (OneZone Chamber of Commerce president), and I was telling her how amazing the year’s been but I really hate being disconnected from the community and have to figure out a way to reconnect. She says, ‘Well, this is a different direction, but HCLA is looking for a new executive director,’ and that’s when the seed was planted.”

Robbins accepted the position around Thanksgiving but doesn’t begin until Jan. 8. But he’s already forming his leadership vision.

“I’ve definitely got a game plan going,” Robbins said. “It became clear quickly (during interview with board members) that we shared a lot of common language and beliefs around the future of the county and the future of HCLA.”

Robbins said his plan centers on strengthening HCLA’s existing relationships and making sure everyone in the county knows its mission, and to continue improving efforts to expand and grow the program to reach more leaders.

“I like to think of Hamilton County as fertile ground,” he said. “We’ve got all these resources,  including our people, and our job at HCLA is to really cultivate leadership within the community. When you think about having all this incredible human capital, that opportunity to help people reach the peak of their potential is what I really see. I look at our nearly 700 alumni and all the different things they’re doing within the community, and clearly the community benefits from our alumni and their experiences.”