You are at:Home»Current in Carmel»Carmel Community»Carmel’s OMNI Centre wins 8 awards at Philo Festival of Media Arts

The OMNI Centre in Carmel recently received eight awards at the 2017 Philo Festival of Media Arts. The OMNI Centre specializes in the production and distribution of high-quality digital media content for nonprofits and government entities. 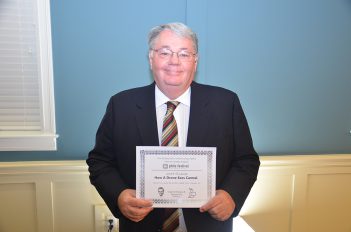 The Philo Festival of Media Arts showcases the talent of media producers. The festival is named after Philo T. Farnsworth, known as the father of modern television.

The OMNI Centre produced a documentary called the Rebirth of Fire Station 44 that focused on the 18-month journey to tear down and rebuild the station near Main and 131st streets. It also produced a video called Fire Station 44 Opening that showcased the opening day ceremony of the new station.

“Rebirth of Fire Station 44 follows the lives of the firefighters from the time they had to move out of the building, taking anything they could take out of the building to repurpose, moving into a house in the Cool Creek neighborhood and then finally moving back into the new station,” said Sandra Long, president of OMNI Centre.

Doug Callahan, Clay Township Trustee, accepted the awards on behalf of OMNI Centre. Callahan served as chief of the Carmel Fire Dept. from 1996 to 2007.

“Doug was chosen because we thought he would best represent these videos,” Long said. “He is terribly enthusiastic and had been heavily involved in the re-building process. He really had his heart in it. He sponsored the video. Without him it wouldn’t have been possible.”

Callahan said he was overwhelmed receiving awards with such close personal ties.

“I felt great and really privileged to receive the award, because the township was so involved with the building of the new station,” Callahan said. “I retired from this department and was able to go out as a member of that community. It was a big deal for me.”