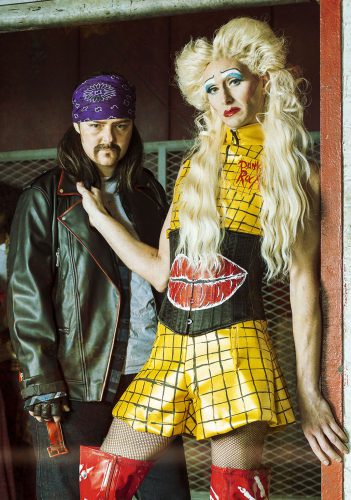 From left, Kate Homan (Yitzhak) and Tim Hunt (Hedwig) from “Hedwig and the Angry Inch.”

The first time Zach Rosing was asked to help with a theater production, he was sure he was the wrong man for the job.

By the time the run concluded, he was sure theater production was in his blood.

“I first got involved in producing theater in 2008, when a friend asked me to help with a local independent production of the musical ‘Bare,’” Rosing said. “I wasn’t much of a theater person before that, and I’m certainly not an actor, but I realized the various skills from my video and media production business translated very well to theater.

“I made a lot of great friends, and from there I was hooked.”

A 2001 graduate of Zionsville Community High School, Rosing has produced more than 20 shows since 2008. His most recent effort is the rock musical “Hedwig and the Angry Inch,” which begins an eight-performance run Jan. 5 at the Epilogue Playhouse in Indianapolis.

Rosing, owner of Zach Rosing Productions LLC, a video, photography and multimedia business, is working on the show with producing partner Zack Neiditch. Collaborating under moniker Zach & Zack, Rosing and Neiditch share responsibilities, which are rather easy to identify.

“For ‘Hedwig,’ I’m in charge of a variety of responsibilities, including assembling a staff, money, marketing, including taking photos and designing artwork, securing the venue, ticketing, etc.,” Rosing said. “Basically, all the behind-the-scenes administrative stuff. I’m also the sound designer for the show.”

A long-time Zionsville resident who moved to Indianapolis a few years ago, Rosing has worked on his own productions and done others for theater companies. He is a three-time winner of NUVO’s Best Locally Produced Play for his work on “The Rocky Horror Picture Show,” “The Great Bike Race” and “The Gab.” He is producing “Hedwig” for the second time.

A stage musical that opened Off-Broadway in 1998, “Hedwig” tells the fictional tale of Hedwig Schmidt, an East German “rock goddess” who makes it over the Berlin Wall after a botched sex-change operation and learns “a thing or two” about life along the way. The cast includes Tim Hunt (who is also the associate producer) as Hedwig Schmidt and Kate Homan as Yitzhak.

“I’m excited to revisit it in an intimate, 50-seat venue,” Rosing said. “We always try to surpass expectations for what a nomadic theater company can produce. Audiences should expect an evening they’ll never forget. Also, it will be loud.”

The show contains mature content and is recommended for people 16 and older. For more, visit zachandzack.com; Facebook.com/ZachAndZack; or Instagram@zachnzack.

What: Rock musical “Hedwig and the Angry Inch”