You are at:Home»Current in Carmel»Carmel Cover Stories»The year ahead: More roundabouts, Monon upgrades among city’s plans for 2018

Last year was one of the busiest years for construction in Carmel history, and 2018 looks to bring more of the same.

New roundabouts are planned along 116th Street, and construction will begin to transform the 96th Street and Keystone Parkway interchange into a roundabout.

Construction will continue in Midtown and along the Monon Trail as well.

Carmel motorists saw a lot of road work in 2017 with several roundabouts completed. It seems that 2018 will feature more of the same. Roundabouts are planned at 111th and 116th streets, along with Medical Drive. Walking paths and medians also will be added. 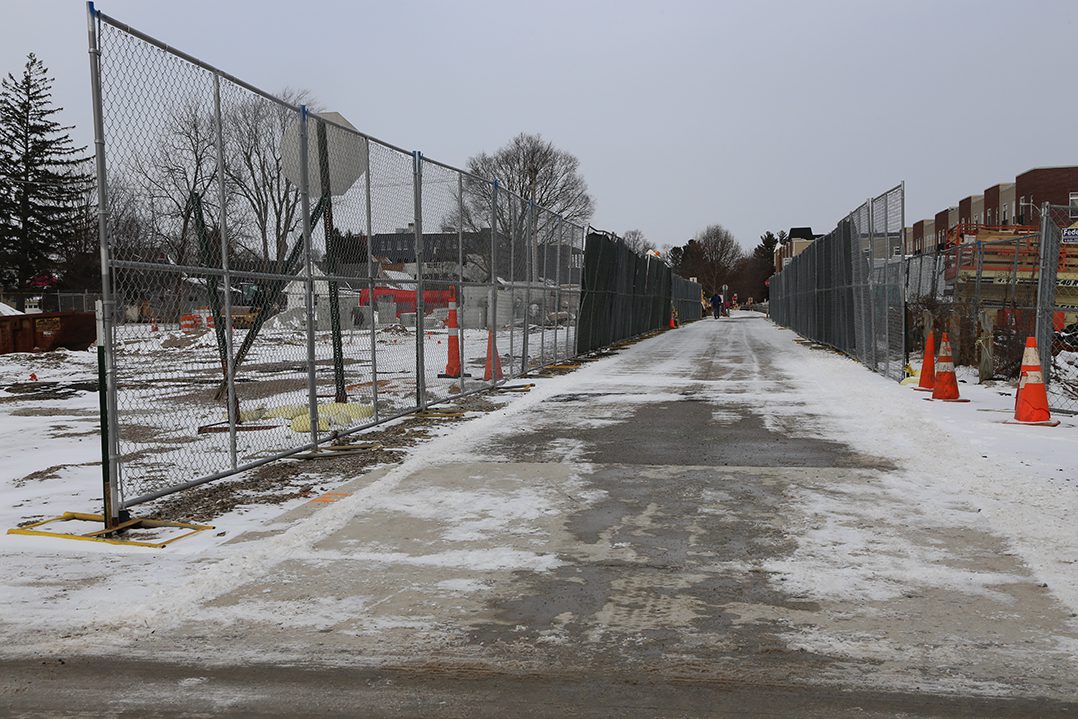 pgrades are planned in 2018 for the Monon Greenway in Carmel’s Midtown. (Photo by Ann Marie Shambaugh)

The city plans for the widening and complete makeover of the Monon Greenway from Main Street to just south of City Center Drive to be complete by the end of 2018. The first stage includes building a one-way road for motorists on one side of the Monon. Vehicles won’t immediately be able to drive on it when complete because it will serve as a detour for cylcists while construction is under way on the cyclist/pedestrian trail, thus keeping the Monon open at all times. 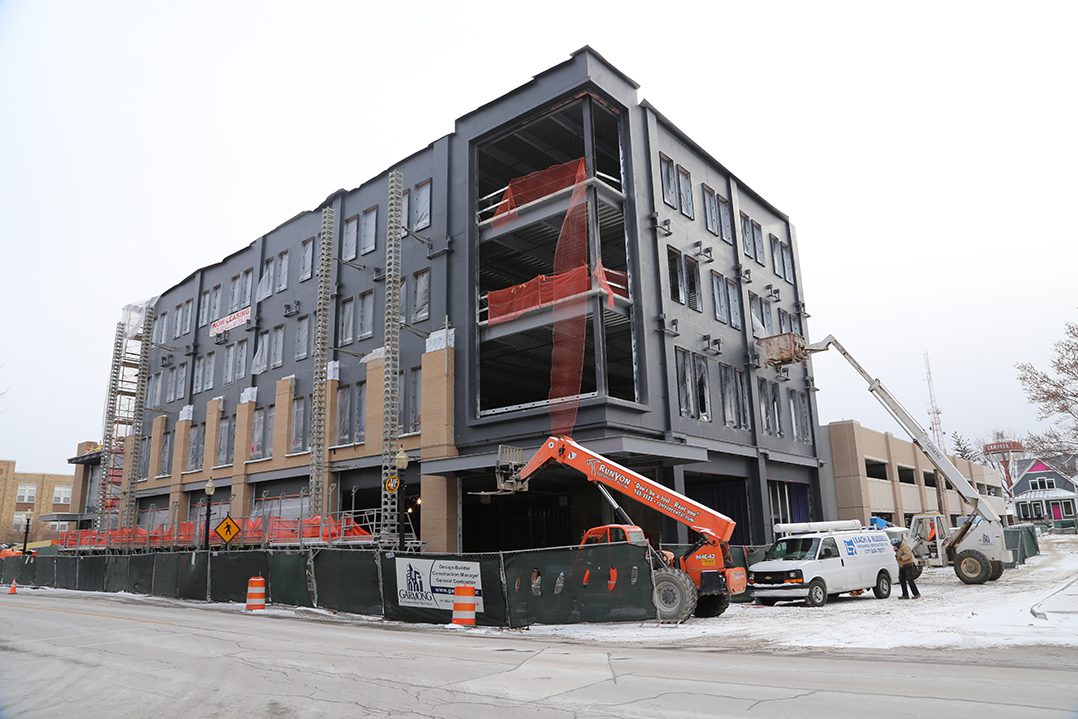 Monon and Main is among several projects under construction expected to open in 2018.
(Photo by Ann Marie
Shambaugh)

Chuck Lazzara and his son, Anthony, already have begun construction on their mixed-use building at Main Street and the Monon Greenway across from Bub’s Burgers. Monon and Main will include condos for sale and office space anchored by Anthony’s Chophouse, an upscale steakhouse with a view of the Monon that will open in 2018. There’s also a rooftop bar and a free parking garage. Valet parking will be available using newly built one-way roads that circle the development. 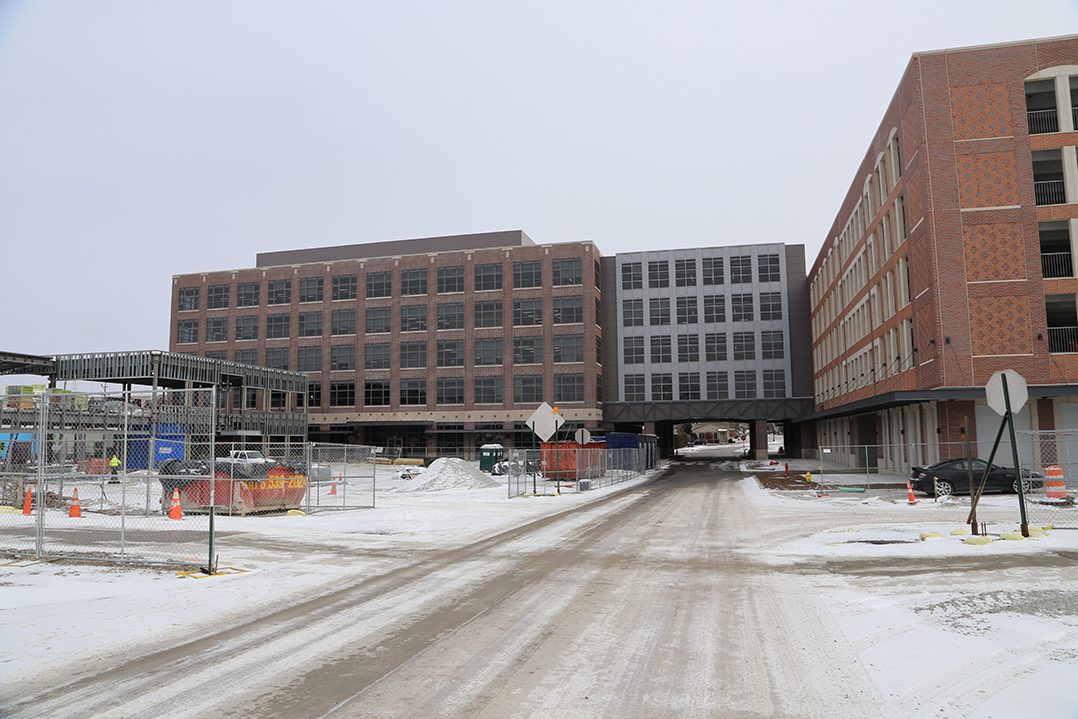 Several buildings are under construction in Midtown between Range Line Road and the Monon Greenway. (Photo by Ann Marie Shambaugh)

Justin Moffett of Old Town Design announced his vision for Midtown Carmel in 2014. Right before the end of 2017, the first buildings began opening and welcoming residents. Employees have moved into the new headquarters for Allied Solutions and FC Tucker. A new east-west road has been built that crosses the Monon and connects to 3rd Avenue SW on the west and a new roundabout along Range Line Road on the east. Construction is under way for the new Sun King Distillery next to these headquarters and an opening is scheduled for first half of 2018.

Construction should begin on various new projects, such as a proposed mixed-use development at 116th Street and Range Line Road;ctwo rental unit properties along the Monon; a new headquarters for KAR Auction Services; a headquarters for MJ Insurance and more. Construction on The Proscenium, which already had a groundbreaking, will begin after a utility issue was resolved at its site at Carmel Drive and Range Line.

Some work has already begun, but real progress should made in 2018 to turn the traffic light intersection into a teardrop roundabout interchange. The project will be done in stages so there’s never a complete closure.

The Carmel City Council previously voted to turn Carmel into a second class city, which means there will be two members added to the city council for a new total of nine seats. One will represent the entire city in an at-large position, and a council district will be created. This will necessitate redistricting, and the new council district map – which will include recently annexed Home Place – will likely be finalized in the first quarter of 2018. By law, each district is required to have roughly the same number of residents. Candidates will likely not make their announcements until at least summer of 2018, which would be a year before the municipal elections in 2019. Many candidates will likely wait until fall or later to announce.

Besides the municipal elections, Carmel residents will vote in primaries for local candidates for Hamilton County Council. Incumbent Fred Glynn and challenger Sue Maki will face off for one Carmel seat and several people are lining up to replace retiring councilor Paul Ayers, a Carmel resident. Former Carmel City Councilor Rick Sharp announced he’s going to run for the seat, and so has Ken Alexander, a Westfield resident and former head of Grand Park.

Carmel recently reached an agreement to annex the 2.1-square-mile unincorporated area between 99th and 111th streets in the center of Carmel. The annexation won’t happen until this year, so residents in that area will not immediately pay Carmel property taxes. With annexation, there will be talk of revitalizing the area and the new role of township government since Clay Township and the City of Carmel will share the same borders.

Hamilton County will spend $36.8 million to expand the county jail and judicial center. The Hamilton County Council has promised that no tax increase will be needed to fund the project. Construction will begin this year but might not be finished by year’s end.

Every year, Carmel residents and guests are treated to festivals that celebrate the arts, such as the International Arts Festival, Art of Wine, Artomobilia and PorchFest. The Center for the Performing Arts has some big shows planned for 2018, including Michael Bolton, Art Garfunkel, Richard Marx, Lonestar, Ronnie Milsap, “Weird Al” Yankovic, Itzhak Perlman, “Hairspray: The Musical,” “Million Dollar Quartet” and more.

The city’s annual two-day Fourth of July festival promises to be bigger and better than ever. For 2018, there will be a new addition aimed at teenagers and youth who might be too old for many games and rides at KidZone but too young for beer and music at NorthZone. It’ll be called Extreme Zone and will feature an obstacle course based on the TV show “American Ninja Warrior.”

In early 2018, construction is expected to wrap up on the Monon Community Center remodel that will add new workout spaces — including equipment on the bridge overlooking the Monon — and different entrances. From now on, visitors will only have two points of entry: From the east building and from the west parking lot. The doors near the Monon Trail will only be available for emergency exits to ensure child safety and to prevent people from sneaking in without paying.