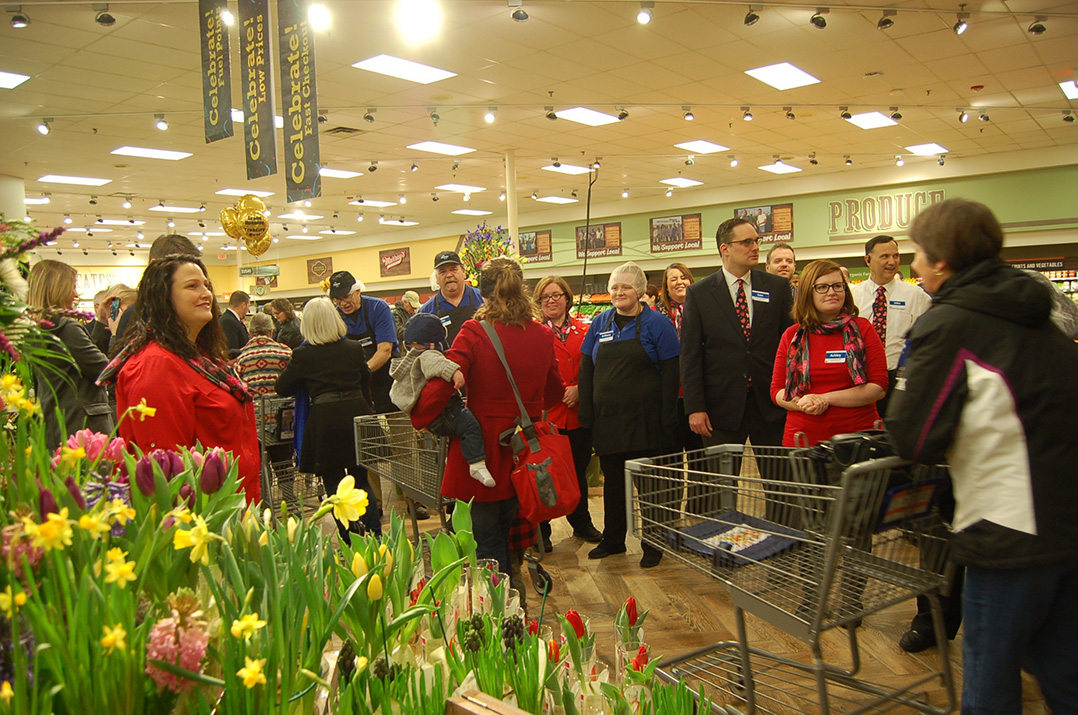 Kroger employees greet some of the first customers through the door at the new store at 5 Boone Village. (Photo by Heather Lusk)

The wait is over.

For many Zionsville residents and businesses, the opening of Kroger couldn’t come soon enough. The nearly 40,000-square-foot store has been empty since Marsh closed its doors in July 2017.

“As you know, Kroger has been trying to bring a store to Zionsville for decades,” said Pam Matthews, Kroger’s president of the central division.

Fourteen former Marsh employees will return to 5 Boone Village, including store manager Steve Carroll, who has been in the grocery business 40 years.

“It’s an honor to be back in this store,” Carroll said. “I just felt like part of the community.”

Carroll said customers will notice the service will stay the same, but in addition to upgraded checkout areas, Kroger brings other changes. The dairy sections have been moved to make restocking easier, and shelves are taller to accommodate excess product that is often stocked in back. A vegan section, chilled hard cider case, specialty cheese area and a sushi and salad bar have been added.

Stan Evans, president of RSE Realty Inc., which manages Boone Village, had a few nervous weeks not knowing whether there would be a paying tenant for the property after Marsh filed for bankruptcy. When Kroger completed the purchase and was obligated to pay rent, he began discussions to see how the property would be used.

“It fairly quickly became clear that (Kroger) intended to open it as a grocery store,” Evans said.

Remodeling her hardware store a year earlier helped somewhat, but she said some of the new events made a difference.

“It’s always good to sharpen your skills and see if what you’re doing is working or not working,” she said.

Restaurants like Books and Brews and Amore felt the impact on their kitchens when an ingredient was needed. Amore owner Chris Simone noticed a gradual decrease in customers throughout the fall and winter but is confident that will change. 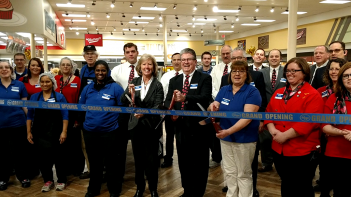 “This is going to be an injection of life into the strip center,” he said.

Bill Kern, owner of Kern Bro’s Shoes, hasn’t noticed an impact on his business but knows that his customers are tired of driving longer distances for certain items. He also believes all of Boone Village will notice an increase in shoppers from the grocery.

“I think the more traffic we have, the better it is for all merchants,” he said.

Evans, who commended Akard’s efforts to bring shoppers to Boone Village, believes the new store impacts not only the tenants but the entire community.

“Obviously, traffic is substantially down without a grocery store,” Evans said. “It affects that whole intersection.”

Kroger has been using retail space in Boone Village as a hiring center. Once it vacates that space, it will be occupied by a restaurant, Evans said, which will bring the shopping center to full capacity.

Last spring, Evans received approval for a new building on Boone Village property which broke ground in early January. The project was elayed by discussions and plans with the tenant.

The new 8,000-square-foot property will be a medical building occupied by a single tenant whose identity is being kept secret. Evans expects construction to be complete by the end of summer.

“This struck a decent balance for us in terms of not killing traffic and parking requirements,” Evans said.

Because much of the Boone Village parking lot is now blocked for construction, Evans is working with Kroger to make as many parking spaces as possible for customers.

“The first week or two will probably be a little crazy,” he said.

The Boone Village Kroger is the third former Marsh store to open following the reopening of for former Marshes in downtown Indianapolis and Muncie. The Michigan Road location will be the fifth overall former Marsh to reopen as Kroger.

Marsh declared bankruptcy May 11, 2017. It sold 26 stores at auction and closed others.

The new Kroger will be open from 6 a.m. to midnight daily.

“Tough times can and do happen to some people,” said Eric Halvorson, Kroger’s manager of corporate affairs. “Hunger relief is a primary commitment of Kroger. This is how we put food on the table for people who worry about finding their next meal.”

“We need to participate in this actively,” said Rev. C. Davies Reed of St. Francis, who offered a challenge to his congregation to donate as much additional food as possible over the next two weeks. “It’s a great gift that we’ve been given.”

St. Francis leadership also voted to match the $1,000 to meet other needs at The Caring Center in Boone County, the beneficiary of food donations from the church.

Catherine Coscia with the Zionsville Food Pantry said that with the colder weather, the timing of the check was especially important.

“Right now people have to decide, ‘Do we want heat or to eat?’” Coscia said.

The Zionsville Food Pantry serves more than 100 families each week.