You are at:Home»Current in Noblesville»Noblesville Community»DNA law inspired by Zionsville murder now in effect 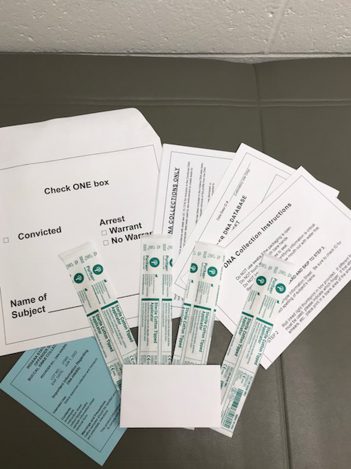 As of Jan. 1, felony arrestees in Indiana are required to submit to a DNA test. (Submitted photo)

With the implementation of Senate Bill 322, Indiana requires all felony arrestees to submit a DNA sample. The bill was signed into law last summer but went into effect Jan. 1 after the state spent time gathering supplies, hiring personnel and training employees to use the equipment.

Boone County law enforcement officials, including Boone County Sheriff Mike Nielsen, Prosecutor Todd Meyer and Zionsville Police Dept. Chief Robert Knox, proposed the bill after the murder of 82-year-old John Clements in Zionsville. Nielsen said matching a DNA sample from the scene to a sample in Ohio was the only reason the case was solved, which led to the arrest of Damoine Wilcoxson in 2016.

“That case is absolutely what motivated this Senate Bill 322,” Nielsen said. “The prosecutor saw the importance of DNA, contacted me and Chief Knox of the Zionsville Police Dept., and we did everything we could to get Sen. (Erin) Houchin to push this bill, write this bill and push it through the House.”

Nielsen said local jails previously collected fingerprints and took photographs, but only those convicted of violent crimes or sex offenses were required to provide a DNA sample. Now, all felony arrestees will provide a sample via cheek swab after going after being booked. The samples are placed in a sealed envelope and sent to the Indiana State Police.

The bill also specifies that a DNA sample will be removed from the database if the charges are converted to misdemeanors, if the charges are dropped or if there are no other felony charges filed against the arrestee within one year.

With the state providing the supplies and training, Nielsen said there is no cost to the county other than the five minutes it takes to swab.

“I think it’ll impact us tremendously,” he said. “I think you’re going to see a lot of DNA samples that are put in the database that may or may not have been there in any other arrest that we’ve done over the years. This is truly a step for us as law enforcement to provide us that tool that we need to solve crimes, such as the Wilcoxson crime.”