Keith Potts will show off his vast variety of musical skills.

“It’s a traditional cabaret-style show,” Potts said. “I  sing a lot of songs, but I also tell some stories, crack some jokes. It tells a little bit about my life, about my career as well as some songs I love to sing.” 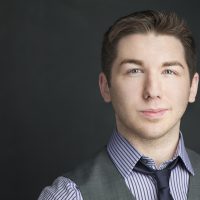 Magic Thread Cabaret will present “Keith Potts: Here I Am” at The Cat Theatre, 254 Veterans Way, Carmel, March 2 and 3. The shows are 7 and 9:30 p.m. each night. The show is 90 minutes including a 15-minute intermission.

Potts, who lives in Indianapolis just across from the Carmel line, appeared in Actors Theatre of Indiana’s “The 25th Annual Putnam County Spelling Bee” this month.

“It’s a busy beginning of the year for me, but busy with all the things I love to do,” Potts said.

“I’m excited with the Songbook Academy at The Palladium nearby. There is already a fan base for this style,” Potts said.

The songs will cover a variety of music.

Potts said he likes to sing songs that he wouldn’t traditionally sing in a musical theater context.

“So, I sing songs that are written for characters much older than me or for a female character,” Potts said. “One of my favorite musicals is ‘Gypsy,’ and I’ll be singing ‘Everything’s Coming Up Roses’ from that show. I’m also doing a sonata featuring cello and piano to give my voice a break. I started playing cello when I was 10 years old, so that’s something I’m excited to incorporate into this show.”

Potts, 28, will be accompanied by a three-piece band.

Potts, who grew up in Chicago, attended the Boston Conservatory of Music. He teaches private lessons as well as group theater classes for Jr. Civic Theatre.