You are at:Home»Views»Column: Women running the railroad

There has been a lot of local discussion about railroads lately, and, since (March) is Women’s History Month, I thought I might show how the railroads offered 19th-century women some non-traditional roles – telegraph operators and stations agents. 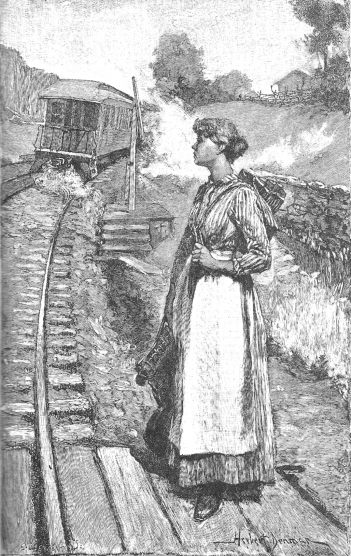 Women often carried mailbags as part of their many duties as telegraph operators and station agents. (Image courtesy of Hamilton East Public Library)

The role of a station agent was an important one in a community. Agents had to sell tickets, operate the telegraph, hand off orders to train crews and handle mailbags. Since the latter two were usually done while the train was in motion, this required some skill. These were young women who were given very responsible positions, although this wasn’t unusual. Josephine “Josie” McCain was appointed the Hortonville postmaster in 1901 at the age of 20, just after she had just graduated from Union High School in Westfield.

Bertha McVey (1874-1939) was hired as a telegraph operator at the Noblesville Midland station in 1891 when she was little more than a teenager. She was originally from the Crawfordsville area, where her father had been postmaster at New Ross. This may have been how she got into the business. She worked in several places for the Midland Railroad and the Cleveland, Cincinnati, Chicago and St. Louis Railroad (the “big four”). She was listed in the Peoria city directory as a telegraph operator, but had been in charge of stations elsewhere.

Women were highly regarded (but paid less) as telegraph operators in the 1800s. They tended to have fine motor coordination that would make their messages faster and more accurate. Interestingly, operators could recognize other operators by their technique, which was called their “fist.” Since there were both men and women online, occasionally romances would be carried out (the telegraph has been called an early form of the internet). This happened to Bertha’s relative Zilla McVey, who was telegraph operator at Pittsboro and New Ross. She secretly married the New Castle station agent in August 1901. It was discovered in October, and she had to resign her position.

Since railroad stations were often the focus of community activity, some station agents saw some exciting times. Olive “Ollie” McChesney (1859-1929) was a young widow who was station agent at Fishers in 1880, where she lived with her sister and her 4-year-old son. It’s very possible she was at her job during the Battle of Mudsock, an explosion of violence in November 1881 that left one dead and 32 injured. Ollie would have been the person to send a telegraph message to Noblesville to alert the sheriff, literally while the bullets were flying. The sheriff arrived by handcar, and Ollie would have been the first person he would have seen.

David Heighway is the Hamilton County historian at Hamilton East Public Library. He can be contacted by emailing heighwayd@hepl.lib.in.us.