You are at:Home»Current in Carmel»Carmel Community»Chicago-based ultra-marathoner eager to compete on Carmel’s ‘perfect’ course 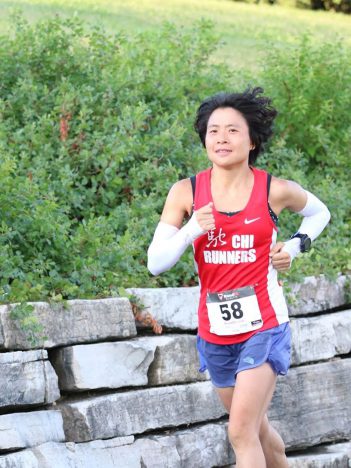 Soon, she expects to cross another accomplishment off her list when she completes the Carmel Marathon. Gao, 39, has heard many good things about the March 31 event from fellow runners in the Chicago-based ChiRunners Club but has never competed in it.

“We all know that Carmel Marathon’s course is perfect for runners, the weather is always great and organization and support is wonderful,” she said. “It has become the most favorite marathon in our club.”

Gao, who has qualified for the Boston, New York and Chicago marathons, said her running club is an affiliate of the Indy Chinese Running Club. Between the two groups, approximately 100 runners are signed up for the event, and race directors created a special bib to celebrate the team.

Last year, Gao finished the New York Marathon in 3 hours and 7 seconds, placing first for Chinese women. She also has competed in ultra-marathon races. She ran 127 miles in 24 hours at a race last year, breaking the course record. She was the women’s champion in five ultra-marathons last year and was the overall champion in two of them.

“This will be a wonderful party, so I am very excited,” she said of competing in the Carmel Marathon. “Indiana is my lucky place. Last year, I won the Indiana Trail 100 miles and finished the race in 20 hours. After that, I also won the Jackson County 50-50 in Indiana and broke the women’s course record. I look forward to making another achievement in (the) Carmel Marathon.”

Gao said mental and physical perseverance are the keys to distance running.

“In a marathon or ultra-marathon, there are always some moments we refuse to give up, but our body refuses to go on,” she said. “Sometimes I got chafing on the inner thighs, sometimes I found my stomach upset and began vomiting, sometimes I got a rolled ankle, sometimes I was under the risk of hypothermia. Blisters and black or missing toenails are something like a fashion statement and a badge of honor. I know it’s useless to complain at those moments. Give up on giving up and you will always find a way.”