Moontown Brewing threw a grand opening party like no other – a self-proclaimed four-day “rager” March 15 to 18 – coinciding with NCAA March Madness. 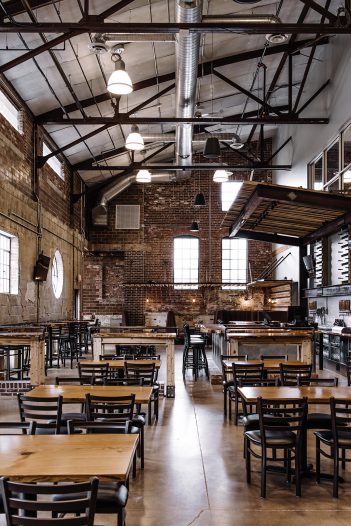 “It was absolutely incredible. There are some tired Moontown employees out there, but this is only because they dumped their hearts and souls into providing the best experience possible,” said Patrick Mattingly, one of Moontown’s co-owners.

It was first announced in August 2016 that Moontown Brewing would open in the historic former Whitestown High School gym. Moontown’s event venue opened in October 2017, and the taproom opened in January. Mattingly said contributions from the Moontown team, the Town of Whitestown and close friends and family helped bring it to fruition.

“Without them, Moontown wouldn’t be any more than a daydream,” Mattingly said. “It means the easy part is now over. The gritty work of running, maintaining and constantly improving our organization and space has started and won’t ever stop. It feels great, but to keep it feeling great we’ve got to execute.”

Moontown has two main areas where patrons can be seated, plus an outdoor patio on the west side. The first main area, the brewpub, seats 95. A family friendly side area seats approximately 45 while the 21-and-older side seats approximately 50. The outdoor patio has built-in benches and a fire pit and can seat 40. It is family  and dog-friendly. The second main area is the event space, the 1915 Room, which seats 150 to 200 people.

Each space is unique, Mattingly said, with all elements carefully planned.

“The textures are crazy from Burr Oak wood tables and bar tops, the beautiful stainless jungle that is the brewery, the steel elements and wood bleachers that were salvaged and re-used throughout,” he said. “We equipped the entire facility with a state-of-the-art Klipsch audio system because we care about what your ears are fed. The lighting system is nearly all customizable and dimmable. Our feeling is that the experience here will be one of the most unique our customer(s) have had.”

And then there’s the beer. Moontown has the capability to serve 20 beers at a time. Currently, there are nine on draft. The brewery is working toward getting 12 on draft ahead of its Maibock tapping party April 28.

“The styles vary from traditional German Export Lager, to fresh and dank Vermont Style (NE) IPA, to a voluptuous Barrel Aged Breakfast Stout, which includes ingredients that are either harvested or crafted right here in Indiana,” Mattingly said. “All beers will be served fresh from bright tanks and kegs. The food is BBQ-centric, as we like to call it. The smells that come from that kitchen are otherworldly. All of our meats and fresh green ingredients are sourced locally as much as possible.”

A kids menu is available as well as wine and liquor.

Customer response has been positive.

“I think this building, going from landmark to eyesore and now back to landmark/functioning brewpub, is something the people – especially in Whitestown – adore to no end,” Mattingly said. “It’s amazing to think our participation in the inaugural Whitestown Beer Fest was the real catalyst for finally taking the plunge and working toward opening a business.”