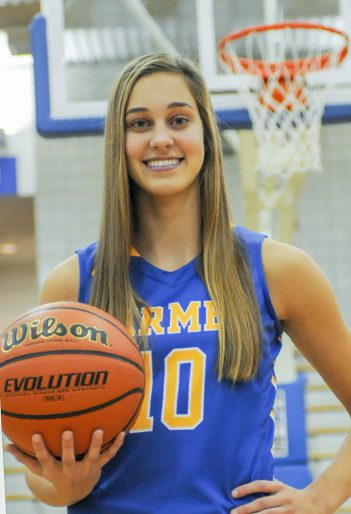 “She’s the best pure point guard I’ve coached or seen at the high school level,” Windlan said. “She can really control a game and take over a game with so many facets of her game without scoring. She’s very versatile and a great defender.”

“It’s definitely an honor, but I couldn’t have done it without (Windlan’s) help my four years along with all of my teammates,” said Dilk, who will play for Michigan next season.

“I don’t look at stats too much. I try to do whatever I can to help my team win,” Dilk said. “I try to take what the game gives me. If that is getting the rebounds the team needs or getting the ball to the right spot, to try to make the best decision possible as a point guard is what I try to focus on.”

Although the Greyhounds didn’t reach their goal of winning the Class 4A state title, Dilk said she was proud of what the team did accomplish.

“One of our goals was not losing a game at home, and we accomplished that,” she said.

Carmel won its third consecutive sectional title before losing to Zionsville 54-49 in the regional semifinals. The Greyhounds had previously beaten ZIonsville 66-48 Nov. 14 and 75-51 in the Hall of Fame Classic championship game.

Dilk was selected to play for the Indiana All-Star game against Kentucky in June. She is one of five finalists for Indiana Miss Basketball. The winner will be announced April 29 at a banquet.

Joining Dilk on the All-Star team is Carmel teammate Tomi Taiwo, who will play for Iowa next season.

“I’m proud of Tomi making it. In the 2018 class, there is so much talent, so narrowing it down to 13 players is incredibly difficult,” Dilk said. “It’s going to be awesome playing together with the girls I grew up playing against, closing off our high school careers together and, hopefully, beating Kentucky.”