You are at:Home»Current in Carmel»Carmel Cover Stories»Open to opportunities: After Marsh closings, vacant sites could be prime for redevelopment 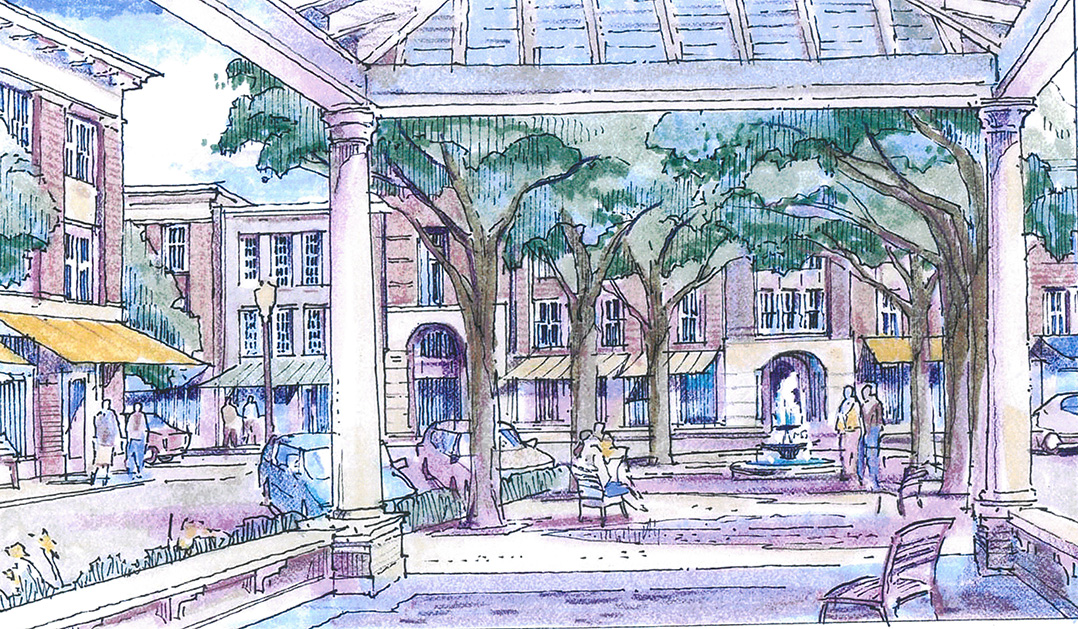 The City of Carmel is working with developers and property owners to determine the future of former grocery store sites. (Photo Illustration)

For decades, Marsh supermarkets and O’Malia grocery stores were part of the fabric of Carmel.

Marsh, on the other hand, came to Carmel much later. Marsh joined the Merchant’s Square Shopping Center in 1997, in a space once occupied by Target.

Now — after Marsh declared bankruptcy in 2017 — both grocery chains are no more and the City of Carmel is considering what to do with the vacancies left behind.

Carmel Mayor Jim Brainard said urban planner Jeff Speck designed a redevelopment plan for the Merchant’s Square area in 2012. With the Marsh vacancy, along with many others, he said there’s a need to revisit that plan.

As for O’Malia, the family owns the shopping center and several tenants are still operating at that site. Carmel City Council President Kevin “Woody” Rider said he strongly believes there should be a grocery store east of Keystone. 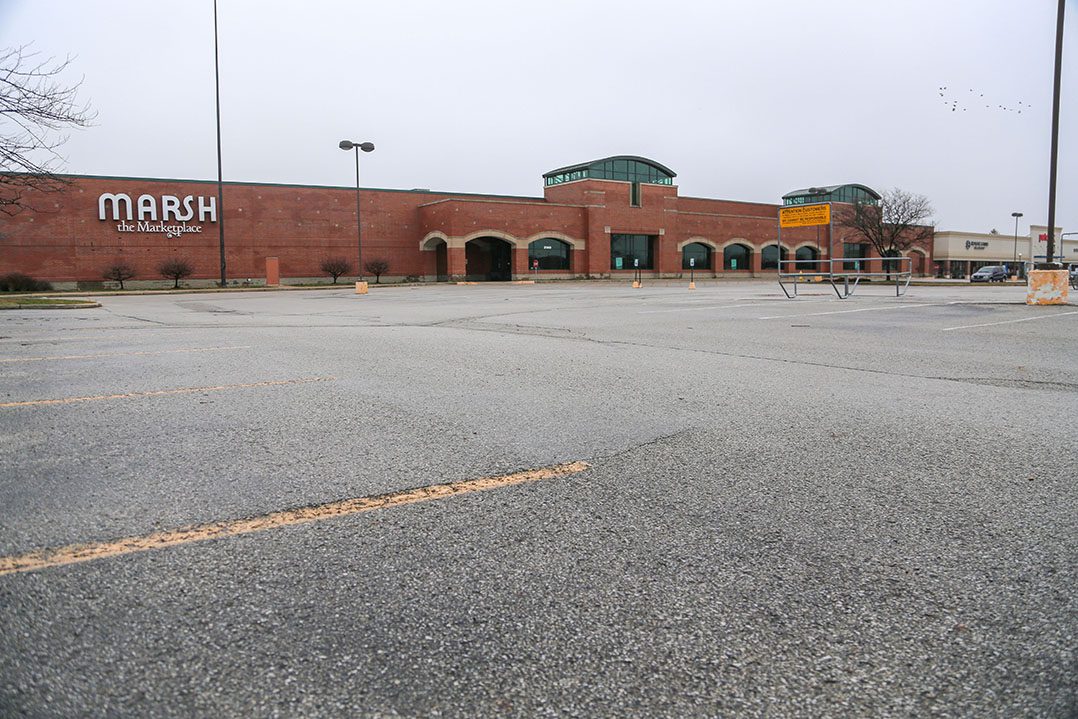 A building that once housed Marsh at 116th Street and Keystone Parkway now sits empty in Merchants Square. (Photo by Ann Marie Shambaugh)

Immediately after the Marsh at 116th Street closed in June 2017, many people talked about the possibility of attracting another grocery store to fill the space. Other companies such as Kroger, Fresh Encounter and Needlers Fresh Market bought several Marsh locations. Discount grocer Aldi has been announced to fill the vacant Marsh location in Nora.

A newly rebuilt Kroger and upscale grocer EarthFare are both less than a mile from the vacant Marsh. There’s already a Fresh Market in Westfield along the Carmel border, and there’s a Whole Foods at Clay Terrace. Some speculated that Giant Eagle, which owns Market District along Spring Mill Road in Carmel, had an interest in the 116th Street location. Some residents wishfully threw out the name of Trader Joe’s as a possible tenant.

Brainard didn’t dismiss interest from other grocery chains but said it’s important to revitalize the area for the long-term future. He said now is the time to look at rethinking the shopping center, which was built in 1971 and is owned by the Ramco-Gershenson Properties Trust, which is based in Farmington Hills, Mich.

“It doesn’t have to be all done at once,” Brainard said. “But as we close in on Midtown and City Center, we need to turn to this area.”

The report describes a plan to, “create a pedestrian friendly project while limiting negative impacts on existing businesses.” The report details which buildings could be demolished and which would be integrated into a new design, although much has changed since the report was published in 2012.

“We believe that such a transformation is possible at Merchant’s’ Square, and that this site’s evolution can serve as a model for literally hundreds of similar sites across the country,” the report states.

Several Merchant’s Square tenants have left the area to move elsewhere in Carmel, such as FC Tucker and Panera Bread. Other chains, such as Carraba’s, have closed their locations there.

“Unless it is remade dramatically, Merchant’s’ Square has no reason but to expect a continued slow decline,” the report reads.

The first option would be to build an upscale shopping center, similar to Clay Terrace, but that could be “cannibalistic,” according to the report. Instead, it recommends a mixed-use neighborhood center, which would take advantage of its location next to major transportation infrastructure. There would be roundabouts, walking paths, tree lines and multi-story buildings with street side parking and possibly parking garages. Redevelopment could go as far north as Carmel Drive and could include the shopping center that includes the 501 Event Center.

Some areas in Merchant’s Square that struggled at the time of the 2012 report now have thriving tenants. Flix Brewhouse is in a space that was once a target for redevelopment, according to the report. Brainard said this plan takes into account that some buildings can be kept and some can be demolished and rebuilt.

“It is hoped that a limited redesign of this site, along with a better connection to Merchant’s Square, might allow it to succeed,” the report states.

Brainard said Ramco has seen the plan and discussed it with city officials, but it’s likely that another developer would have to purchase Merchant’s Square to kickstart redevelopment. Brainard said the City is searching for interested buyers to make that introduction.

He said the walkable design would be a huge benefit to Carmel.

“It would really open this up I think,” he said. “It should be a pedestrian-friendly area.”

Current spoke to representatives from Ramco but they didn’t call back with a comment.

Brainard said he doesn’t think it’s 100 percent necessary to get a grocery store at Merchant’s Square because there are so many options nearby, but he’d really like to see one come to east Carmel to fill the void left by the O’Malia closure.

“The key is to get a good grocery store in there very quickly,” he said. “Although it’s quick to get to the stores along Range Line, it’s so convenient to have one east of Keystone.”

Rider said the council is focused on this issue, especially the two councilors who represent east Carmel, Jeff Worrell and Sue Finkam, and the two at-large counselors, Rider and Ron Carter. Rider said he strongly believes a grocery store needs to go into that space.

“Carmel has to have a grocery store east of Keystone,” he said.

Rider said all options are being discussed, and they will keep the public informed on any big developments.

“We’re engaged in discussions, because this is important to the people of Carmel,” he said.

While there are many thriving tenants in the shopping center, Brainard said a large vacancy such as that could provide an opportunity to rethink the center’s design. He said it’s up to the owners, but the City would be willing to assist in any plans.

“The center is older,” he said. “It’s up to the developer but it might make for a better value to start over.”

Duke Hardy, of Barrett & Stokely, who has managed the center since July 2003, which is called Brookshire Village Shoppes, said he’s not aware of any redevelopment by the owner. He said they have not talked with the mayor about any plan. He said the family is considering its options with regard to a replacement of the grocery store tenant or selling the property to someone who would redevelop the area. He said there’s nothing concrete at this time to announce.

Several Carmel residents who live near Merchants Square weighed in on what they would like to see at that site.

“Bring Longhorn restaurant back and more mid-scale restaurants. It’s hard to find a place to eat with ‘good’ food in that area!” Dee Lentz, Home Place

“A roller skating rink. None around here. Would provide a great outlet with our kids.” Lissa Kehaya-Billanti, Brookshire

“Trader Joe’s, even though I don’t think they will come to tiny Carmel. I (would like to see) Carrabba’s back.” John LaFollette, Cool Creek

“Upscale restaurant would be nice, or a Fresh Market or Fresh Tyme type of market. Hoping they won’t put a discount store, as 116th Street gets too much traffic as it is.” Lyn Nore, Echo Crest