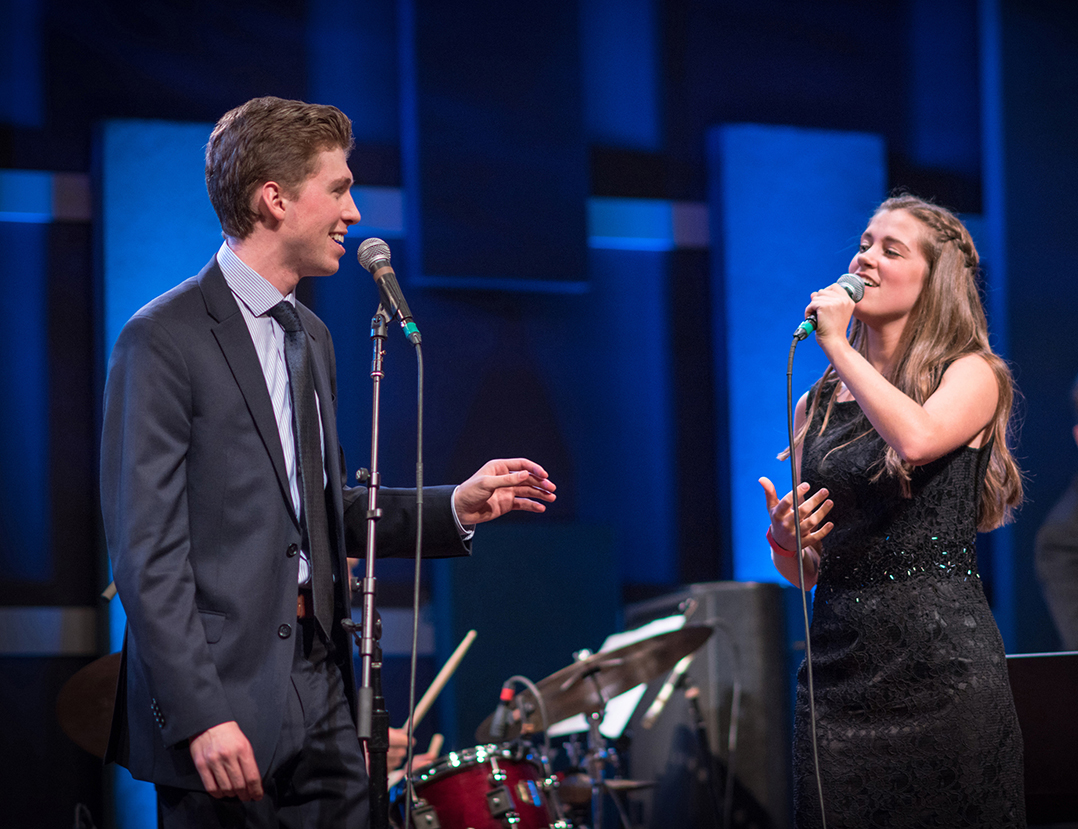 For Julia Goodwin and Nick Ziobro, this concert venue is a home away from home.

“The Palladium is where I first fell in love with the Great American Songbook,” Goodwin said. “I always say it is one of my favorite venues to perform at, and I feel so at home whenever I return.”

“The audience can expect to see the two of us returning to the place where it all began for us, celebrating the music that made us who we are,” Ziobro said. “I can’t wait to step back on stage at the Palladium with Michael. The Palladium always feels like home every time we come back to perform, and it’s really exciting to be there with Michael, where it all began with the Songbook Academy.”

Feinstein is the founder of the Great American Songbook Foundation and artistic director for the Center for the Performing Arts.

“Michael is an undeniably incredible talent, mentor and friend. It is always a pleasure working with him,” Goodwin said. “Nick and I have each been very fortunate to perform with Michael many times over the years. Michael has taken us under his wing to places such as Carnegie Hall, 54 Below, Jazz at Lincoln Center and more.”

Ziobro said Feinstein has been an amazing mentor on those experiences, offering guidance and advice.

As the duo Nick and Julia, Goodwin and Ziobro have been performing together for a little more than three years.

“However, we’ve known each other since a very young age through community theater involvement,” Goodwin said.

“We’ve known each other for years because we are from the same hometown. However, we didn’t start performing as a duo until about December 2014, so a little over three years,” Ziobro said.

They met performing in a “13″ musical. Goodwin said she was in awe of Ziobo’s talent and they clicked immediately as friends.

“I had heard of Julia before because when she was really young she was a local celebrity,” Ziobro said. “She had some viral Youtube hits, and everyone was really excited to meet her. We performed together onstage in ’13’ in 2011. Seven years later we’re partners in crime.”

Goodwin said she and Ziobro will showcase a wide variety of the Songbook songs.

“We have a Carole King mashup that I’m particularly excited about,” Goodwin said. “People can expect an exciting evening, filled with music that has shaped us into the people and artists we are today. Especially with the amazing band led by Tedd Firth, it will be a show you don’t want to miss.”

Ziobro said he and Goodwin always do a fun duet of the two Harold Arlen classics, “Stormy Weather” and “When The Sun Comes Out.”

Goodwin and Ziobro were both on “America’s Got Talent.”

“‘America’s Got Talent’ was a very cool experience,” Goodwin said. “Nick and I were on different seasons of the show, but both appreciate the exposure, friendship, and opportunities it gave us.”

Where: The Palladium, the Center for the Performing Arts.