You are at:Home»Current in Zionsville»Zionsville Cover Stories»Speaking up: Grassroots group Boone County Voices for Change aims to be a resource for all 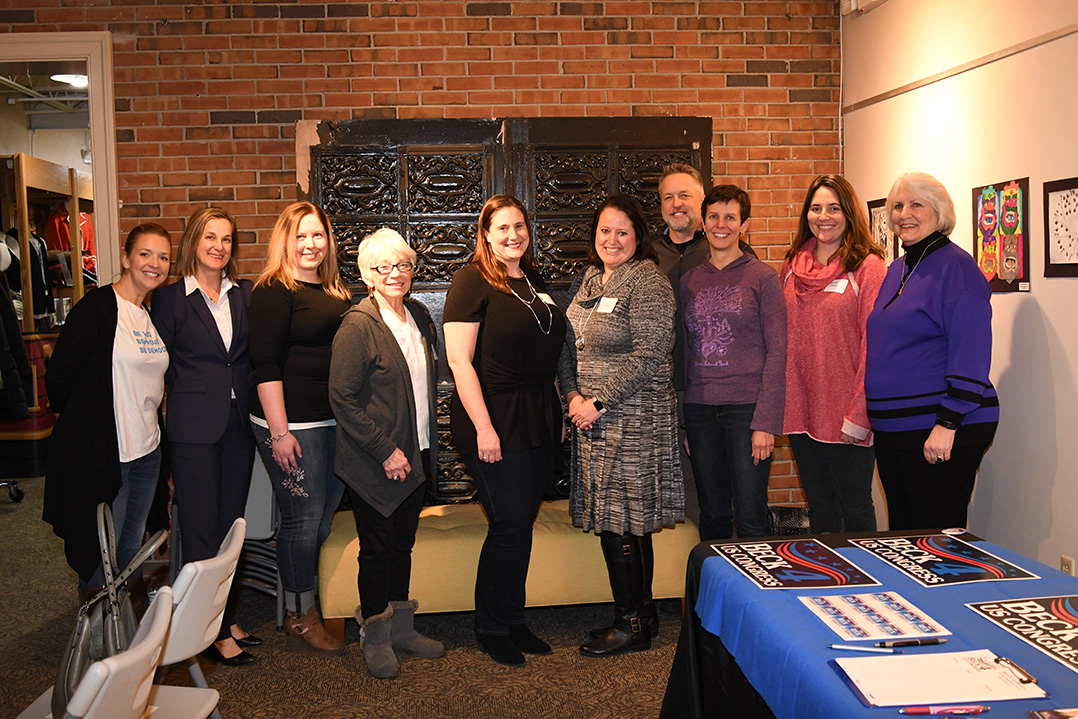 Frustrated after the 2016 election, Zionsville resident Jan Hornaday wanted to channel her emotions into something good. She reached out to a dozen friends to consider volunteering or creating a short-term service project, asking them to include others who might be interested. The news spread, and when they held their first meeting in late November 2017 to figure out how to make a difference in the community, more than 150 people attended.

“This was not a long-term plan,” Hornaday said. “It’s been a complete surprise.” 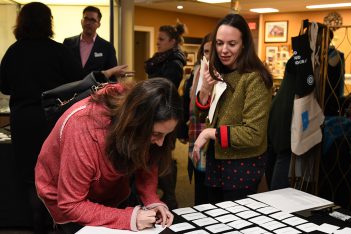 Courtney Doran signs in at the event as she speaks with Andrea Spahn-McGraw. (Photo by Dawn Pearson)

Last November, Hornaday stood before members of Boone County Voices for Change, the organization that evolved from the collective interest of local residents, and celebrated one year of existence.

BCVC began as an outlet for the friends to help the community but has become a resource for non-partisan political information.

“Not everything we do is political,” Hornaday said.

The group has held forums about implicit bias, redistricting reform and community-building activities. The group includes men and women across party lines.

“I think because we’re issues-based, there’s room for everyone,” Hornaday said. “One of our pillars is to promote a fair and open democracy.” 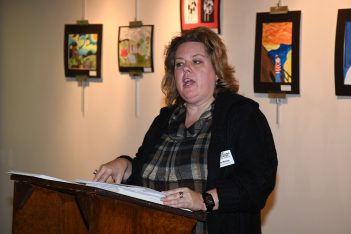 Amy Nelson, executive director of the Fair Housing Center of Central Indiana and the Central Indiana Alliance Against Hate, speaks at a Boone County Voices for Change event. (Photo by Dawn Pearson)

Hornaday said some Republican members want to be educated on both sides of issues, some have a more independent viewpoint and some want to change their party views from within. She encourages everyone to be more involved in their parties.

The Boone County Voices for Change Facebook page now has 1,000 members. In the first year, it created an executive board, a steering committee, formed interest group committees and held four speaker-led events.

“I think that was one of the primary motivations, just to find other people in the community that might have a similar outlook,” said Kara Sims, vice president of BCVC. “I think everyone was really amazed at how many other people there were here who were sympathetic.”

Hornaday said in its first year the organization has empowered people to be active in government and their community.

“It harkens back to our name, Voices for Change, giving everyone a voice to find each other, to give them the confidence to use their voice in a way they wouldn’t before with a legislator or a friend who might have a different viewpoint,” Hornaday said.

It’s that collective voice that Hornaday said may have had an impact on legislation within the past year.

“We’re just combining with all the voices in the state and the nation on some issues, and empowering people to call,” Hornaday said.

The group also encourages members to take an active role in the community by running for office, something that Marcia Rosenfeld had considered in the past but never took seriously until recently. It was partly because of encouragement from BCVC that she decided to run for Boone County Council in District 1.

“People never felt like they could win before (as a Democrat),” Rosenfeld said.

She is the only Democrat running in her district for the primary and one of two Democrats in Zionsville running for county council positions.

“I know that these women are behind me,” she said.

Rosenfeld hopes that others will better understand what elected roles entail and realize how they can make a difference by running for public office.

“People in BCVC are in it because they’re passionate,” Rosenfeld said. “They don’t necessarily think of themselves as politicians.”

Looking to the future, Hornaday has a short-term plan to bring more general interest speakers to their public sessions, encouraging questions from every point of view.

“Our tagline is to bring balance to the conversation in Boone County,” Hornaday said.

One of her original goals for the group is to listen to and understand both sides of issues.

“I don’t think that there’s an end point. I don’t think that if something changes in an election, if a person wins or some person loses we think our job is done,” Hornaday said. “We see (BCVC) in for the long haul to keep bringing balance to the conversation, making small changes on issues.”

A year ago, a sister chapter emerged from Boone County Voices for Change.

As a former resident of Boone County, Kathryn Ransburg was connected with many people participating in BCVC. Even though she lives in Hendricks County, she became involved with the group and eventually asked on Facebook if others in her county would be interested in creating something with a local focus.

“We wanted to do something more than just be involved in party politics,” she said.

The group’s goal is to promote civic engagement in Hendricks County and the state.

HCVC members host a monthly series of speakers addressing general topics of interest such as education and veteran services.

With more than 400 members, Ransburg said the biggest surprise is that people are no longer hesitant to share differing opinions.

“This whole thing has taken on a life of its own, and that’s a wonderful thing,” she said.