Ralph Rancourt realized his talent for art when he was a teenager, but he admits his passion for creating artwork was dormant for four decades after he served in World War II in the U.S. Army Air Corps. 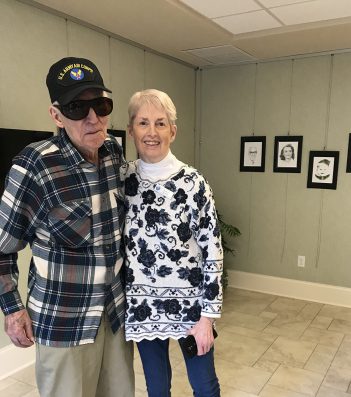 Ralph Rancourt with his friend and fellow resident Yvonne Toombs. Toombs convinced Rancourt to display his artwork at The Barrington. (Photo by Anna Skinner)

He didn’t qualify for combat because of color-blindness, which would later determine his art medium – black and white pencil drawing.

“I didn’t pursue it again until after I retired,” said the 95-year-old Rancourt, who resides at The Barrington in Carmel. “It was something I wanted to dabble with and as I progressed, I gained a level of experience I didn’t expect to.”

“I developed my technique and it’s rather unique. It’s 3-dimensional and photo quality,” Rancourt said. “When people think pencil, they think sketches, but I don’t do sketches.”

The Barrington hosted an art reception for Rancourt’s work April 4. Copies of his work were hung in the art studio and residents attended the reception.

Rancourt said his friend Yvonne Toombs convinced him to agree to displaying his work. Toombs said she and Rancourt often dine together and was leaning against allowing the display but changed his mind.

“I was rather reluctant initially, but they kept working on me until I finally gave in,” Rancourt said.