You are at:Home»Current in Noblesville»Noblesville Community»Indiana Transportation Museum seeks help, offers reward for identification of vandal

After vandals broke several windows on two train cars and caused other damage totaling up to $20,000, the Indiana Transportation Museum is offering a $1,000 reward for anyone who provides information leading to the arrest and prosecution of the suspect or suspects. 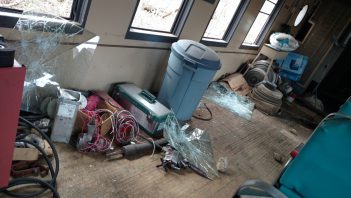 The crime occurred on the evening of April 11 or April 12. John McNichols, chair of the museum, said it’s clear the act was intentional.

“A number of windows were knocked out with rocks, and we are not talking handheld (rocks), but big rocks about the size of a softball,” he said. “It was very intentional. One car has 12 or 13 windows knocked out and another car had them all knocked out.”

McNichols said a tree branch was found on the inside of one of the cars and is presumed to have knocked out several windows from the inside.

The vandalism isn’t the first on museum grounds. Last year, all the windows of train cars were painted as well as the seats on the interior of the cars. The damage amounted to $60,000.

“Some people believe this is politically motivated, but I have a hard time drawing that conclusion,” McNichols said. “We hope somebody will know something and we can find out who did it.”

Since the Indiana Transportation Museum is operated solely by volunteers, they are the ones who maintain and repair the damaged train cars.

“It’s alarming that someone is that devious to do the damage they did,” McNichols said. “Throwing rocks is one thing, but this was very intentional and it was not accidental. There was a significant amount of damage.”