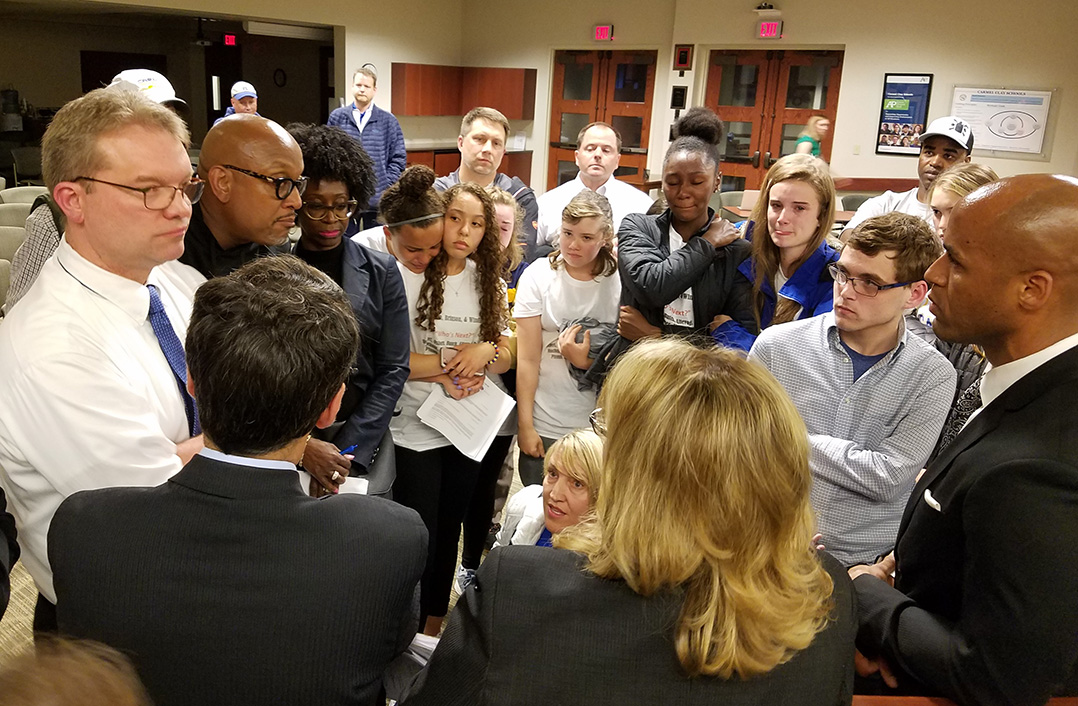 Members of the Carmel High School girls basketball team and their parents speak to Carmel Clay Schools officials about the dismissal of Coach Tod Windlan after the April 23 school board meeting. (Photo by Ann Marie Shambaugh)

Dozens of Carmel High School students and parents attended the April 23 Carmel Clay Schools board of trustees meeting to show support for Tod Windlan, who was dismissed as the CHS girls basketball coach April 20.

The decision came exactly one week after CHS principal Dr. Thomas Harmas sent a letter to parents of girls on the basketball team stating that a “thorough review” of the program had been conducted and, as a result, an open practice policy had been implemented. It concluded by stating that “there will not be a change in the head coach position as part of this plan.” 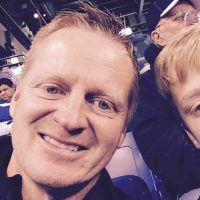 A week later, parents learned that the decision was reversed. After the school board meeting, co-interim Supt. Roger McMichael declined to specify what led to new direction, only saying that administrators gave “more consideration given to the matter and the decision was changed.”

At the school board meeting, Windlan’s supporters wore #FreeWindlan shirts and stood in solidarity whenever someone addressed the school board to voice concerns. The show of support followed a rally earlier in the day at the Carmel Clay Public Library.

Laruen Gartenhaus, a sophomore on the basketball team, said Windlan is a role model who cared about each of the players, even asking them to text him when they got home if they were traveling in bad weather. She said most of her teammates supported Harmas’ initial plan to keep Windlan.

“We do not understand why he was fired,” she told the school board. “Several of my teammates and I were shocked to hear this news, because this team means so much more to us than just basketball.”

Tom Leonard, whose daughter is a member of the basketball team, said that nearly 90 percent of the team supports retaining Windlan as coach. He questioned why, if Windlan’s actions were so “egregious,” parents were not alerted about the issues during the season, which ended Feb. 10 with a loss to Zionsville in the regional semifinals.

“Everything from the beginning to the end surrounding this process of determining the fate of Coach Windlan screams foul, as the issues at hand were held at bay until the conclusion of the season,” Leonard said.

School board members and administrators did not directly address the issue during the meeting, but afterward they spoke with several parents and students seeking answers. CCS officials declined to share details on what led to the dismissal, repeatedly stating that it was a personnel matter and that employees have a right to privacy. School board member Michael Kerschner said he didn’t believe the situation that led to the dismissal involved criminal activity.

Several parents indicated that only a few members of the team wanted Windlan removed and that those players allegedly bullied some of their teammates into speaking against the coach during the investigation.

Aaron Seitz, whose daughter is a freshman on the team, told Kerschner and co-interim Supt. Amy Dudley that listening to the complaints of a small minority could set a worrisome precedent.

“If you stand by this decision, you are rewarding the selfish parents. You’re rewarding the parents who are only about their kids first,” Seitz said after the meeting. “If I’m (CHS football coach) John Hebert, if I’m (CHS girls soccer coach Frank Dixon) or any of our coaches, I’m worried.”

Windlan became the girls basketball coach in 2014. He is also a wellness teacher at Carmel High School and will remain in that position, McMichael said after the school board meeting.

“We’re not concerned,” McMichael said. “Mr. Windlan is by all indications a very fine teacher, and we don’t expect anything to change.”

Windlan’s supporters have launched a GoFundMe page at gofundme.com/freewindlan with a goal of raising $1,000 to cover T-shirts, bracelets, posters and other materials for supporting the coach. As of April 23, it had raised more than $610. A petition at thepetitionsite.com/631/766/022/freewindlan/ showing support for Windlan had more than 650 signatures as of April 23.