A group of Washington Woods Elementary School students wanted to change the world, so adults got together to give them an avenue to do so.

Kiwanis International is a service organization allowing its members to meet the needs of children through local service projects, and the Kiwanis Club of Westfield is finding a way to do so by directly involving the community’s children.

The Kiwanis Club of Westfield began impacting the community a year ago and recently approached WWES Assistant Principal Kristin Parisi about launching a K Kids Club at the elementary. Because Washington Woods is a Leader in Me School, which utilizes Stephen Covey’s 7 Habits program to promote leadership characteristics in children, Parisi thought it was a good fit.

“Since we are a Leader in Me school, we do different leadership projects and clubs and activities with children, and we felt like this was a natural fit,” Parisi said. “We chartered our K Kids Club in December (2017) and started meeting in January.”

Elevein kids participate in the club. Tthey have already made blankets to donate to the Hamilton County Humane Society. They are planning to donate blankets to Riverview Hospital and also will grow a garden at the school during the summer months. Members of the Kiwanis Club of Westfield will visit the school to help the students construct a raised garden bed for the vegetables when weather permits.

“These kids wanted to save the world one puppy at a time,” Parisi said. “The kids wanted to meet all summer long, so the vegetables will be for kids to take home and take to Open Doors or a couple different local churches for food pantries.” 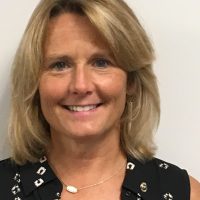 “We were very impressed by that. Where better to start than an elementary school already teaching (students) about leadership?” Paisley said. “We want to help develop leaders and get them to think outside of themselves and learn how to provide service to others.”

Parisi is a member of the Kiwanis Club of Westfield and wanted to help facilitate the trial program at her school, which also served as an avenue to start the club at WWES.

Paisley said the goal is to establish a K Kids Club in all the elementary schools, public and private. However, the club must recruit more members before it can branch out.

The Kiwanis Club of Westfield has two subsidiary clubs – the Key Club at Westfield High School and the K Kids Club at Washington Woods Elementary School. In addition to integrating the K Kids Club at other elementary schools, Kiwanis Club of Westfield Secretary Laurie Paisley said the club wants to bridge the gap between the elementary and high school levels by establishing clubs at the intermediate and middle schools.

“What we’re hoping to do is bridge those two clubs by getting a builders’ club in the intermediate school and middle school, so as these kids grow and go from school to school, they’ll be able to continue in a service leadership program and feed into the Key Club at the high school level,” Paisley said.