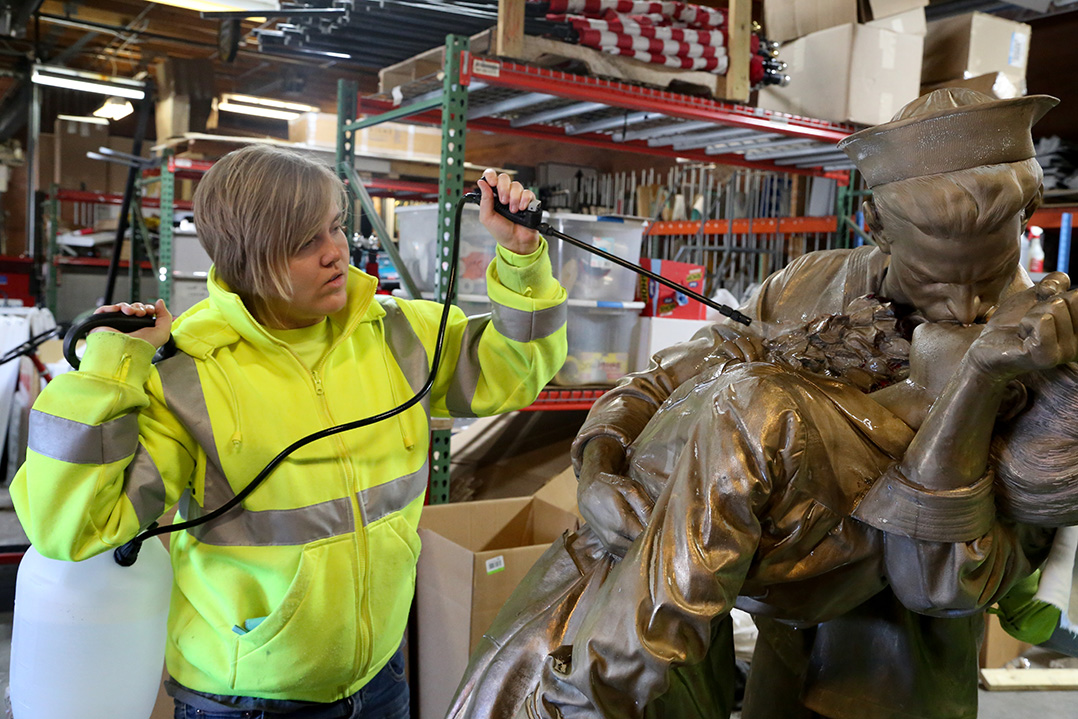 Carmel might be best known for its proliferation of roundabouts, but its collection of lifelike sculptures may be a close second.

The city has spent $1.3 million to install 15 sculptures by J. Seward Johnson in the Arts & Design District and at Carmel City Center since 2005. With such a collection, city leaders decided it would be best to train their own expert to keep the statues in top condition.

For Talia Ariens, the timing couldn’t have been better. She had recently graduated from the Herron School of Art + Design as a printmaking major and was looking for any job she could find in a local gallery to get her foot in the door. That’s when she heard about the unique job opening in the City of Carmel’s Streets Dept.

“(Restoring statues) is definitely not something I would’ve seen myself doing,” said Ariens, a 27-year-old Plainfield resident.

Ariens has worked part-time for the city for approximately one year. Her duties include typical tasks for a laborer, such as watering plants and picking up trash. But she’s among an elite group to be qualified to refurbish the sculptures, a certification that took a week in New Jersey to attain. 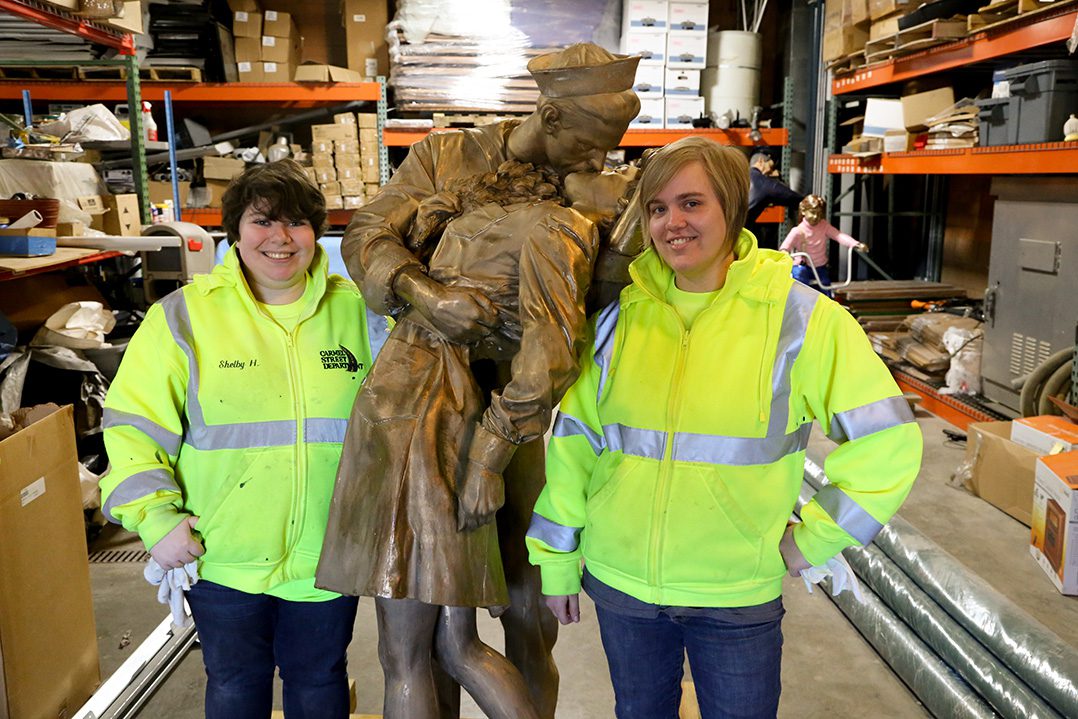 Carmel’s most iconic statues were designed by J. Seward Johnson, a New Jersey-based artist whose work is featured in private collections and museums in the U.S., Canada, Europe and Asia. He initially focused on creating art of everyday activities but also has  sculpted movie icons and scenes from paintings.

Because Carmel’s sculptures are outside, they’re constantly exposed to weather and the public. They receive minor touch-ups each year, but after approximately a decade they must be stripped down and repainted to stay in top condition. Originally, the atelier prohibited anyone but its own staff members from doing maintenance on Seward Johnson statues, but City of Carmel spokesman Dan McFeely said Mayor Jim Brainard negotiated an exception to allow for a Carmel city employee to be trained to do it.

The city has sent three employees to the atelier to receive training. Most recently, Carmel spent $3,826 to send Ariens to Hamilton, N.J., to learn the intricacies of maintaining Carmel’s sculptures. She is one of two trainees on staff and was the first Carmel employee to completely strip the paint from the sculptures and start anew.

During her week in New Jersey, she learned everything from preparing the sculptures for a new coat of paint to adding fine details, such as faint blue veins on a hand. At the atelier, she practiced some of the skills on a sculpture of Marilyn Monroe, a Seward Johnson piece not in Carmel’s collection.

“You use and airbrush tool, so it’s a lot like doing makeup,” said Ariens, the third Carmel employee to receive the training. “You make it look more realistic.”

Ariens got to put her refurbishing skills to the test for the first time in late January when the “First Ride” sculpture was temporarily removed to make room for the expansion of the Monon Greenway (the policeman sculpture just north of the Monon had recently been refurbished after being struck by a car). In March, the city moved its “Unconditional Surrender,” sculpture featuring an iconic sailor and nurse kissing, to the maintenance facility to be repainted.

Ariens works alongside Shelby Hobbs, her friend and roommate who has been with the streets department for approximately four years. They enjoy the challenge of repainting the sculptures, but they have fun completing the little touch-ups done on-site, too, often drawing stares and questions from the public.

“If they see us working, they’re welcome to come talk to us,” Hobbs said, adding the public is encouraged to touch and interact with the statues – when they’re dry, of course.

Ariens is originally from Brookville, Ind., near Cincinnati, and she said many people there are aware of Carmel’s sculptures. She enjoys telling friends and family that she is responsible for restoring them.

“They’re out for everybody to see, which is cool. It’s not like they’re hiding in a gallery,” Ariens said. “This is out here on the street, so everybody knows what these statues are.”

All of the city’s sculptures are funded through Carmel’s arts fund, which is 1 percent of the city’s budget every year. The city’s newest sculpture is in storage awaiting installation  in the Midtown area, although it’s not by Seward Johnson. City of Carmel spokesman Dan McFeely said “Love at First Ride” by Wiktor Szostalo of Black @ White International, LLC features 8-foot tall bicycles connected by a single handlebar and will provide a place for kids to safely climb or the public to rest.

The city has spent $1.3 million to install J. Seward Johnson sculptures in the Arts & Design District and at Carmel City Center. McFeely said the city has not ruled out adding to its Seward Johnson collection.

“They have become quite popular with visitors and residents,” he said.