You are at:Home»Current in Carmel»Carmel Community»Man in ninja-style mask linked to 17 Carmel burglaries

Carmel police are searching for a burglar who wears a dark sweatsuit and ninja-style mask who is believed to be responsible for 17 incidents in the past year and a half. 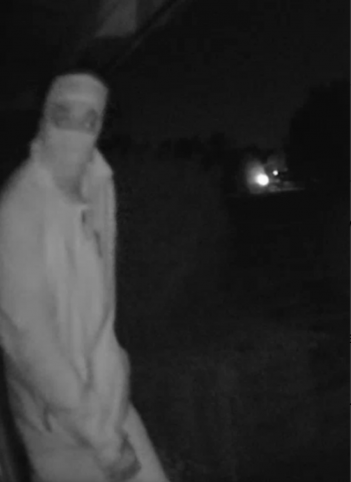 Screenshots from a Carmel resident’s home video surveillance system show the suspect wearing a dark sweatsuit and ninja-style mask. Due to the infrared camera, the sweat suit appears to be light, but it is dark. (Submitted photo)

Home surveillance cameras have caught the man during several burglaries. The Carmel Police Dept. has linked the cases through the video evidence, items recovered at the scene and similarities in items taken, which include expensive jewelry and cash.

The burglar has targeted areas mainly on the southwest side of the city in the area south of Main Street, west of Spring Mill Road, north of 96th Street and east of Michigan Road. Police believe the suspect may also be linked to other burglaries outside of Carmel.

CPD does not believe the suspect has committed a burglary in Carmel since Feb. 3. The last two burglaries occurred in the 12600 block of Rhett Street and the 24000 block of Derek Drive. The burglaries have mainly occurred at night.

The suspect appears to be a tall, slender, olive- or light brown-skinned male dressed in a dark sweatsuit and ninja-style mask.

CPD spokesman Lt. Joe Bickel suggests Carmel residents take simple precautions to help combat burglaries, including ensuring alarm systems and video surveillance systems are working properly, putting a stop on mail or newspaper delivery while on vacation and putting indoor and outdoor lights on timers while away from home.

“Make it appear as if someone’s there,” Bickel said.

Bickel encourages the community to contact police to report any suspicious activity in their neighborhoods.