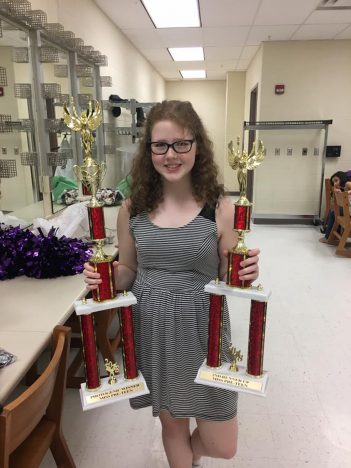 But it likely wouldn’t have happened without a selfless act by her older sister, Jecinda Bankert, who decided to give up her spot after the girls didn’t raise enough sponsorship money for both to compete.

“We went to a lot of places around Zionsville and Boone Village, but we ran out of time,” Bankert said. “There was enough for at least one of us to go through with it, so I wanted my little sister to go. She seemed more passionate about it. It’s more of her dream, and it made her happy.”

When Bankert told Hall, 12, that she should be the one to go, Hall protested that her older sister should compete in the pageant so that she could win scholarship money for college. Bankert is headed to Ball State University in the fall to study nursing. But Bankert decided to focus her scholarship efforts elsewhere, so Hall proceeded.

Bankert found the Miss Teen Pageant opportunity while searching the internet for college scholarship opportunities. She realized that her younger siste also was eligible to participate.

“Everyone (at the pageant) was really nice,” Hall said. “There are over a hundred girls there, so it was pretty big. If you got to the next level, you go to nationals.”

Hall was accepted to the national competition but is still in the process of deciding whether or not to move forward.

“It was nerve-racking, but I was really happy,” Hall said. “I will probably do it again.”