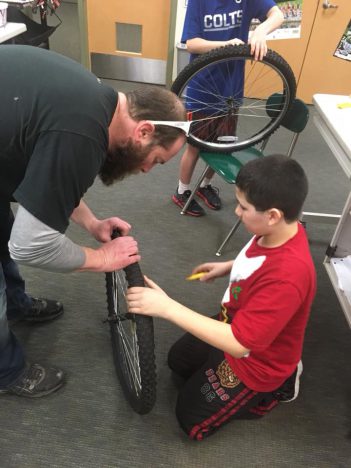 WMS teacher Marc Abriani has always been into cycling and figured WMS could benefit from a bicycle club.

“I really wanted to be able to show the kids some mechanics of bicycles along with getting them active and out and about on their bikes,” Abriani said. “So, what I’ve done is put together a curriculum on different topics of mechanics I feel would be the most of what they need on their own right now.”

The curriculum includes how to change a flat tire, adjusting gears and brakes and correct cleaning techniques. Abriani partnered with Westfield Cyclesports, 18128 Market Ct., because it is near the middle school.

Kids earn points per club time and rides on their own. They track their miles on an online platform. At the end of the club’s season, the student with the most points will receive a bike donated by Westfield Cyclesports.

“What’s cool about it is they can track who is riding miles, so I can get on and see their miles and other students in the group can see what other people are doing in the club, so they can kind of compete that way,” Abriani said.

The club launched March 6 and has 13 student participants. Abriani said he wants to grow the club and continue it next year. He also is working with Westfield Cyclesports about establishing a summer program.

“Hopefully, we can get that distributed through all the schools and get kids active that way,” he said.