You are at:Home»Current in Carmel»Carmel Community»DNR proposal could force pests to be euthanized

Michael Meservy prides himself as a pest control operator who wants to eliminate the problem, not the animal.

“I’ve been doing this for 14 years, and I’ve always been able to catch and release,” said Meservy, who owns Advanced Pest Control in Carmel. “That’s why people call me. They don’t want a raccoon in their attic. They want to get it out but they don’t necessarily want it killed.” 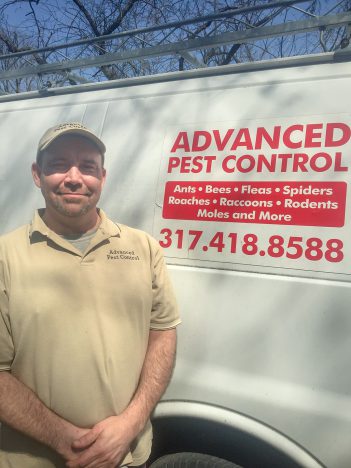 A proposal by the Indiana Dept. of Natural Resources’ Division of Fish & Wildlife would force animal control companies to euthanize raccoons, opossums and coyotes rather than release them elsewhere in the county they were captured.

“One of the reasons, and it’s a weak reason, the DNR gave is they are spreading diseases,” Meservy said. “Animal control operators can tell a diseased animal. It’s not like knowing if your dogs are sick, it’s not hard. If they are, we have to put them down, or if they had been run over or chewed up by a dog. The other reason is it’s a nuisance to other home owners. Quite honestly, if you don’t have a hole in your roof you are never going to have a raccoon in your attic. If you had a hole, you have other animals that are going to get in, squirrels, bats, bees. All these animals don’t have to die because you can’t fix your roof.”

Meservy said often he will ask customers if they can release on their property.

“These are usually people with ponds or streams,’’ Meservy said. “They are not in the middle of the city.”

The DNR position is that raccoons, coyotes and opossums have abundant thriving populations in Indiana and they do not stay where they are released. The proposed rule change states this creates problems for other land owners near the point where the animals are released and might cause those land owners to pay for the removal of the nuisance animal.

It further states that “all three of the species can harm domestic animals and damage crops.”

Meservy said he understands when euthanizing might be necessary, but he opposes the blanket rule.

“The customer should have the choice to choose if they don’t want it killed,” Meservy said.

Marty Benson, DNR assistant director of communications, said the rule change was proposed by the DNR to the Natural Resources Commission. The NRC gave the package (that includes the proposal) preliminary approval last fall, starting what is a long and deliberate rules process. There was a public comment period that closed March 23.

The NRC will consider the rules proposal package, taking into consideration public comments, at a meeting at 10 a.m. May 15 at Fort Harrison State Park in Indianapolis. Benson said the NRC could pass the whole package, approve it after removing some proposals or not approve anything.

Whatever is approved would go on to the attorney general’s office and then the governor’s office for consideration. Benson said there is no timeline for that process and nothing would become a rule, which has the effect of law, until signed by the governor.