You are at:Home»Current in Carmel»Carmel Community»IndyCar drivers, kids team up to support Children’s TherAplay Foundation 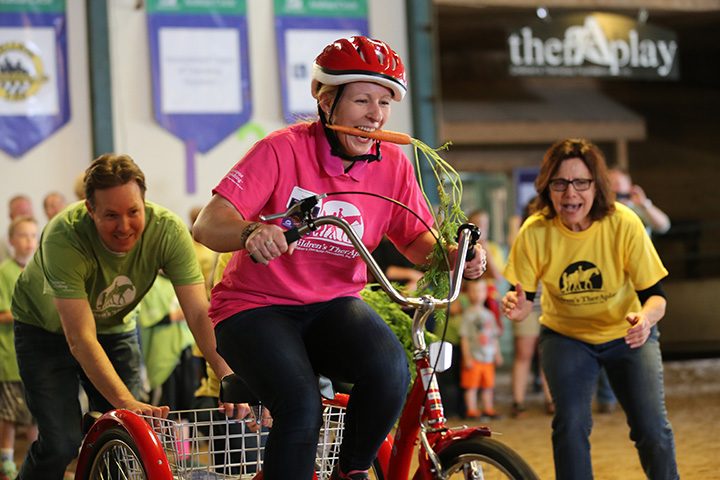 IndyCar driver Pippa Mann races toward the finish line after grabbing a carrot from her teammate at the 2016 Horsepower 500. (File photo)

Ten IndyCar drivers will partner with children with special needs for the third annual #Horsepower500, set for May 8 at the Children’s TherAplay Foundation in Carmel. The soldout fundraiser helps provide equine-assisted physical and occupational therapies for central Indiana children through an event billed as “good silly fun with a purpose.”

“Each year, so many Indy 500 drivers say, ‘Yes, I want to be a part of that,’ and then they have to wait to find out what their availability will be. In many cases, the drivers don’t know what their schedules will be until the last minute, which keeps things exciting for everyone – they never know who might be added to the starting grid,” McCarley said. “In 2016, Scott Dixon became available a few days before the event. In 2017, we got a last-minute call from Tony Stewart’s Indy 500 team saying Jay Howard was now available. Who knows what this year will bring.”

Thirteen driver-child-therapy horse teams will compete in three heats, with the winner of each heat moving on to the final race.

“One of the things that’s so unique about the #Horsepower500 is the opportunity it gives children with special needs to buddy up with a world-class athlete. For these kiddos who, like so many children with special needs, often don’t get to attend the sleepovers or birthday parties or outings, this is just huge,” McCarley said. “So, we make sure to build in time before the race for the drivers and their kiddos’ co-pilots to simply enjoy being together.”