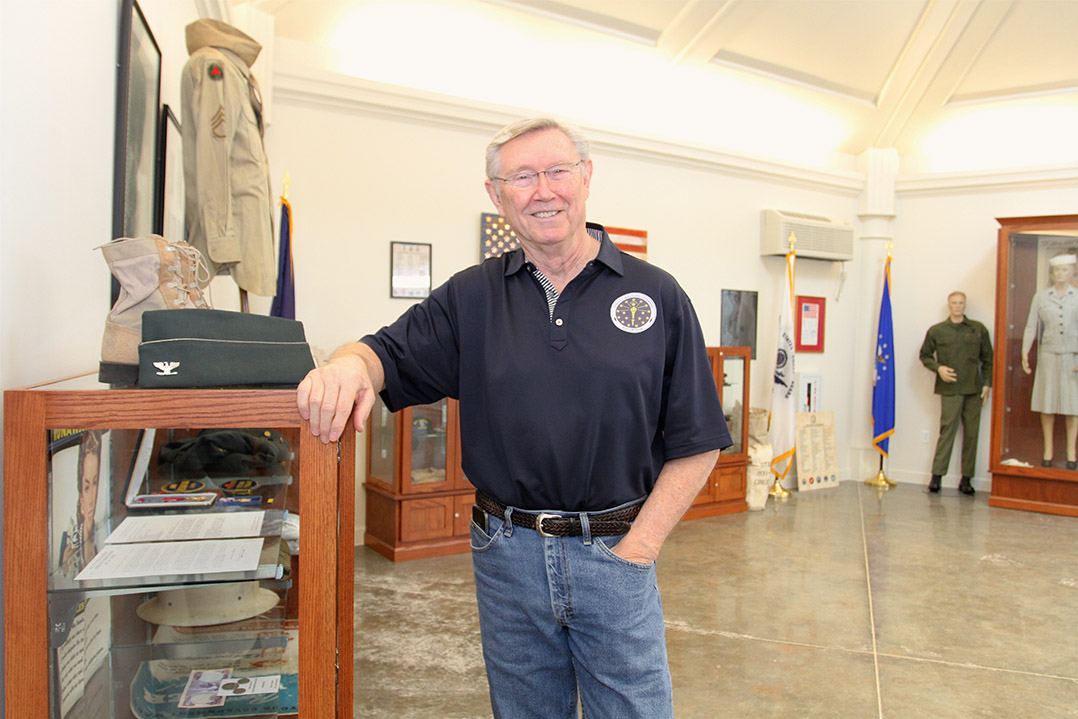 Russ Dowden, veteran and chairman of the Indiana Military Veterans Hall of Fame, pauses inside the new museum, which opened last month in Lawrence. (Photos by Sadie Hunter)

The Indiana Military Veterans Hall of Fame nonprofit was founded in April 2013, with its first class of inductees honored in 2014.

Now, the IMVHOF has a place to call home with last month’s opening of its building and museum at 5360 Herbert Lord Rd. in Lawrence.

The facility is next to the American Legion Dept. of Indiana, the organization that nearly gave the land to the IMVHOF with a renewable lease term of 99 years at $1 per year. 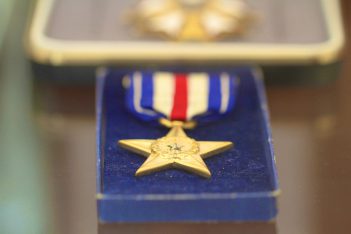 The Silver Star of Russ Dowden, IMVHOF chairman, is on display in the museum.
(Photo by Sadie Hunter)

“It’s been a chore, but it’s been fun,” said Russ Dowden, chairman of the IMVHOF board and retired U.S. Army colonel.

Approximately $330,000 was raised by Indiana credit unions to construct the building, which serves as a museum of military artifacts from Indiana soldiers.

The Hall of Fame’s purpose is simple: To honor Hoosiers who were in the military.

“We just want to say thanks and demonstrate to them and to the public what they have done for us,” Dowden said. “Not just them, not just the service members, but it’s important that we recognize the families, too, so we’ve tried to do that with each one of the induction ceremonies.”

So far, Dowden said Indiana is the only state in the nation with its own, stand-alone  hall of fame building for veterans. He estimates approximately 12 states in the U.S. have veterans halls of fame, many of which are in state’s capitol buildings.

“The artifacts are largely contributed by individuals, although we’ve got some uniform pieces that were contributed to us by the National American Legion,” Dowden said. “The Indiana War Memorial gave us some other pieces and complete uniforms that are on the mannequins around the building. So, all of that has come to us, and we’re happy with the display.”

Dowden said one of the most interesting and unique items in the museum is a blood chit from September 1951.

“The blood chit is something that the military gives to pilots who may become vulnerable or get shot down in enemy territory,” he said. “These also are given to special operations soldiers who could end up being captured. It’s made out of silk and basically says, ‘I’m an American. If you help me, you’ll get a reward.’” 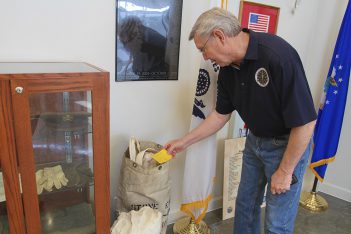 Like many pieces in the museum, the blood chit was donated by Dowden.

Other contributions from Dowden include a Silver Star, a Legion of Merit, uniform pieces, including his boots from Desert Storm, Iraqi currency and more. A regimental print sketched by Dowden and painted by his sister, Dee Dee Dowden, also hangs on the wall.

“I was a 30-year solider, ROTC out of college,” Dowden said. “My last assignment was here at old Fort Harrison. I was commandant of the finance school and chief of the finance corps. I started out as a combat solider. I was in Vietnam in 1966 as an artilleryman. My dad was really bright telling me to major in accounting, so I switched to the finance corps. It was a whole lot safer at the time. So, I finished the next 28 years as a finance officer.”

Beginning in 1967, he was stationed at Fort Harrison intermittently throughout his career. He commanded the 7th Finance Group in Desert Storm.

“We have to have a nomination,”IMVHOF board chair Russ Dowden said. “We do not allow selection committee members or board members to nominate. I often am asked if the deceased service members can be nominated, and of course they can. I’m guessing half of the inductees were combat casualties.”

The IMVHOF only allows Hoosiers to be inducted, meaning only those who were born in Indiana, enlisted in Indiana or lived in the state for at least eight years can be nominated and selected as an inductee. All nominees and inductees also must have received an honorable discharge.

Shirley Ohta is the only female inductee.

“Shirley does a lot of work with veterans out of the Louisville Veterans Hospital for both northern Kentucky and southern Indiana,” Dowden said.

The only category of nominees automatically inducted without review by the IMVHOF selection committee are Medal of Honor recipients.

“We’ve got one living Hoosier recipient of the Medal of Honor distinction, and that is Sammy L. Davis (inducted in 2014),” Dowden said. “Sammy lives in Freedom, Ind. Isn’t that appropriate? So, he’s an inductee as well as all of the other Medal of Honor recipients from Indiana.”

There are 99 Hoosier Medal of Honor recipients.

IMVHOF visitors can read about and see photos of each inductee on four interactive touch screens.

“Our goal with that was if grandkids or family members want to read about their family member, they can,” said Dowden, who also said he looks forward to school groups visiting the hall of fame.