You are at:Home»Current in Zionsville»Zionsville Community»Teens building veterans memorial in Whitestown for Eagle Scout project 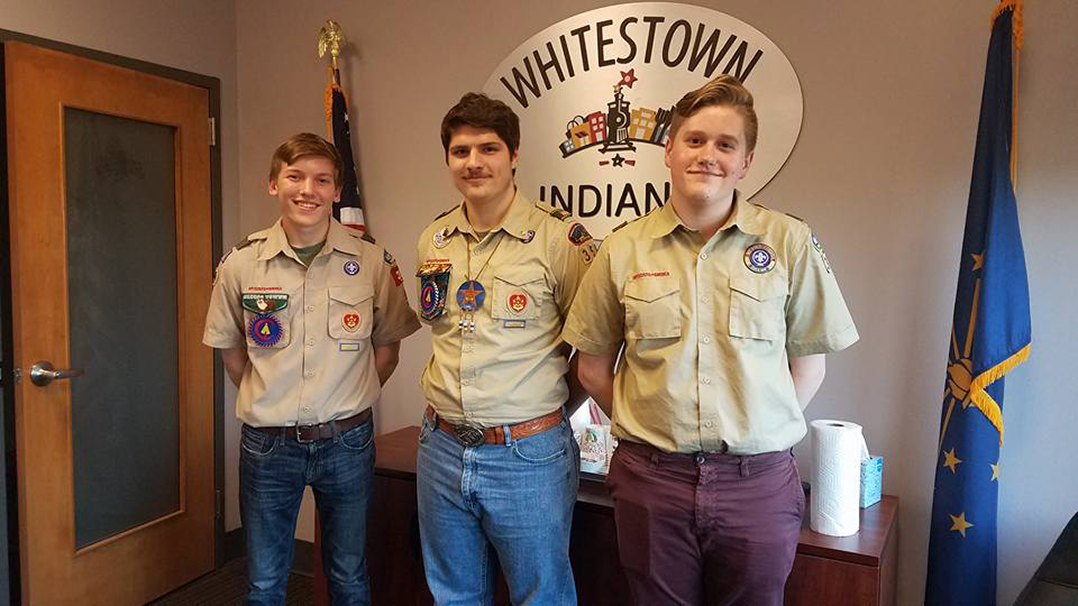 From left, Luke Revercomb, Lucas Pishon and Chris Luciana are working together to build a veterans memorial in Whitestown. (Submitted photo)

Three Zionsville scouts from Boy Scout Troop 358 are raising money for a Veterans Memorial to be built at the Whitestown Municipal Complex. The trio is working on the project as part of attaining their Eagle Scout rank.

The Zionsville Community High School students, Chris Luciana, a sophomore, and Luke Revercomb and Lucas Pishon, both juniors, are working on separate Eagle Scout projects that will culminate in the completion the memorial that would have cost the town approximately $30,000 to build.

The teens got the idea after talking with the Whitestown Veterans Committee and town officials who spoke of their desire to update the front of the municipal complex with a possible veterans theme.

“I wanted to make something that would last for a long time and that would benefit the community as a whole,” said Pishon, whose part of the project is the five limestone memorial pillars featuring a plaque with the insignias of each military branch at a cost of $6,200.

Luciani is in charge of raising $4,000 to create the path to the memorial.

“We are selling engraved bricks for veterans, which will be on the path,” he said. “We are also selling friends and family and business bricks that will be a part of the path.”

Revercomb’s part of the project entails landscaping – from shrubs to lighting to benches – at an estimated cost of $1,000.

“We all picked a part of the project that sounded feasible to us,” Revercomb said. “I have some experience doing some of these things from helping my dad so it fit pretty well.”

“It’s really impressive these high schoolers have such a lofty goal and have chosen to honor local veterans with their Eagle Scout project,” said Tanya Sumner, director of public relations for the Town of Whitestown. “Young people sometimes don’t have as much appreciation for the sacrifices our veterans have made, but these young men are very passionate about our local families who have served in the military and about honoring them through this new memorial.”

The boys hope to have the memorial done in time for the town’s 9/11 remembrance ceremony on Sept. 8.