For Indianapolis Opera General Director David Starkey, the 2018-19 season is continuing to move his organization in a positive direction.

The opera will present “La Boheme” Sept. 14 to 16 at The Tarkington at the Center for the Performing Arts in Carmel. Celebrated international tenor Gregory Turay, who was in Indianapolis Opera’s “La Traviata” in 2017, will return to perform. 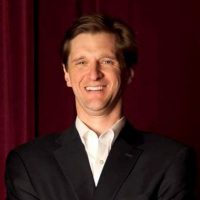 The second production will be “Camelot” March 22 to 24, 2019 at The Schrott Center for the Arts on Butler University’s campus.

“‘Camelot’ and ‘La Boheme’ represent really quality productions and names of projects that people are really excited about,” Starkey said.

Starkey also is excited about the promotional relationship with the other organizations.

Starkey said this year Indianapolis Opera has supported the Indianapolis Symphony Orchestra’s presentation of Mozart’s “The Magic Flute,” which is set for June 8 and 10 at the Hilbert Theatre in Indianapolis.

For the 2018-19 season, Indianapolis Opera has joined in a promotional partnership for Indiana University’s Jacobs School of Music’s production of “Hansel and Gretel” Nov. 16-17.

“We (previously) were not doing our best in getting behind these other organizations and groups that were doing opera presentations in our city,” Starkey said. “I’m very enthusiastic about those relationships that have been coming back together. I think that enhances what we are offering with a traditional piece and a classical musical theater piece. It’s allowing to continue to build a strong new audience base. It’s (two productions) taking a conservative approach of really stabilizing who we are. I will let the audience and patrons know that after this next season, it’s our goal to move into three productions and bring contemporary repertoire back into our plans. We’re looking for a piece, which may be our second world premiere.”

Starkey said it’s about spreading the word about opera and getting these groups to have great attendance.

The Indianapolis Opera’s “Chorus in Concert” is set for Feb. 9 and 10 at Basile Opera Center.

“We debuted that this year to highlight what I think is one of the best opera chorus in the Midwest,” Starkey said. “The enthusiasm of the audience was overwhelming.”