Fitness runs in Taylor Dilk’s blood, and since the age of 16, she knew she would get into competitions. 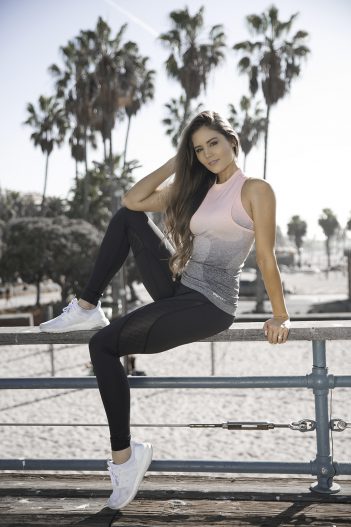 Now 25, Taylor recently received her International Federation of Bodybuilding and Fitness pro card last summer. The end goal for an IFBB competitor is to compete in the Olympia, which Taylor calls the Super Bowl of bodybuilding. Though she’s now a pro, she waited until after college to step onto the stage.

“My family growing up was always very healthy and they started competing when I was in high school, so that’s what sparked my interest in it, not only watching them transform physically but mentally, they really inspired me at a young age,” said Taylor, who grew up in Colorado. “When I was 16 years old, I saw them get on stage and that day, I was like one day I’m going to do this.”

Her family moved to Carmel her senior year of high school, and that’s where she met her husband, Steve. Both are 2011 Carmel High School graduates. Taylor’s father helped introduce the couple to the world of bodybuilding.

“Mainly my dad really got us into the whole lifestyle, for me sooner than Steve because he used to body build and we moved several times in high school because of business things. (Lifting) was my outlet for moving and coping with that,” Taylor said. “I took training and nutrition pretty seriously and knew I would always do something in the field one day.”

After graduating from Purdue University, Taylor and Steve spent a year living with Taylor’s parents so the pair could build their online business. Both Taylor and Steve offer coaching platforms. Although they aren’t training for a specific show right now, the Dilks are launched a clothing platform, called Balance Athletica, this month.

Prior to exploring the fitness industry, Steve was in medical school.

“When I went into medicine, it was to help people,” he said. “I was coaching online fitness the summer between my first and second year and throughout my second year. I feel like I’m more involved with the people I’m working with (through coaching) and actually making a change in their lives. It’s more of a preventative approach, and I like that. It feels much more rewarding than what I would get from practicing medicine, and I feel I’m actually involved in this person’s life and I’m making a difference.”

The Dilks recently moved from Carmel to Colorado. They travel often because of their sponsors and to attend fitness expos around the world.

Taylor’s pro debut will be in 2019 and Steve will try for his pro card next summer.

“Both Steve and I are kind of looking toward 2019 for our next show, but right now we are making our offseason intentional,” Taylor said. “We are still tracking food and trying to make as many improvements as possible right now.”

Many of the Dilks’ clients are people looking to gain a healthier lifestyle, but Taylor said if someone wants to get into competing they should do so for the right reasons.

“I see a lot of people wanting to do a show coming from a place where they hate their physique, but they need to come from a place with love and loving themselves and their bodies for what it is and where they’re at at that time,” Taylor said.

In addition to traveling for competitions, Steve and Taylor Dilk also travel for photo shoots with their sponsors and to fitness expos around the world.

Steve is sponsored by 1st Phorm, a supplement company, and Taylor is sponsored by bodybuilding.com, a meal prep company called Bite Meals and a clothing line called Gymshark.

“I’m one of their (bodybuilding.com) head athletes, so I travel with them to fitness expos, like the Olympia and the Arnold,” Taylor said. “Steve doesn’t travel with (1st Phorm) yet, so he travels with me and helps me with my content and also for his bodybuilding shows.”