“Judy, in my mind, was the best entertainer to ever live,” Gentry said.

Gentry will perform Garland’s songs during Magic Thread Cabaret’s production of “Katy Gentry is Judy Garland LIVE!” The performances are set for 7:30 p.m. July 6 and 7 and 4 p.m. July 8 at The Cat, 254 Veterans Way, Carmel. 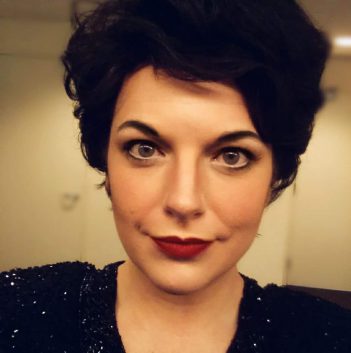 Gentry said the best thing about the 2017 show “Beyond the Rainbow” at Actors Theatre of Indiana was hearing how others remember Garland in the receiving line after the performances. The Fishers resident was one of three actresses to portray

Garland at various stages of her life, sharing a most impressive actress in a lead role/professional theatre division in the 2017 Mitty Awards with Annie Yokum, who played Garland in her middle years and an actress from another show, Karaline Feller. Gentry played Garland at age 38 during her famous 1961 concert at Carnegie Hall.

Gentry had previously played Garland in her 20s in the 2007 ATI production.

“They would love to feature you as Judy,” Gentry said. “Over the last few months I think it’s become its own entity. Of course, it’s a dream for me to feature Judy again.”

She will be accompanied by music director and pianist-composer Klein, bassist Christian Starnes and drummer Greg Wolff.

“I will be dressed as Katy and talking like Katy, but when we feature the songs, Judy will arrive,” Gentry said. “It’s a performance that allows me to share some of my connections with Judy. Then I go into her (persona) and bring her spirit out in the songs.”

“It captures her entire life in one song in that opinion,” Gentry said. “That no matter what happens we’re going to get through this and sort of press on. We’ll end the first act of the show with that. A lot of the songs are taken from the Carnegie Hall show.”

Klein said he wants to accompany the show from the start.

“I was so honored that Katy asked me to music direct, and I actually sing a duet with her as well. I have also always loved this style of music. It’s my thing, for sure,” Klein said. “We thought Katy would be a good fit for our cabaret because we had seen her in “Beyond the Rainbow” at Actors Theatre in Carmel, and we were blown away by her talent. Our mission is also to spotlight and give a stage to central Indiana singers and performers.”

Tickets are $35 and $25, with a beer and wine cash bar and light refreshments. Patrons can buy tickets at brownpapertickets.com or reserve seats by calling 317-649-4CAT or emailing willwood@thecattheatre.com.