You are at:Home»Current in Carmel»Carmel Community»Carmel homeschool mom to appear on Jeopardy! on July 4

A homeschool mom from Carmel will soon be featured on the Jeopardy! TV game show. 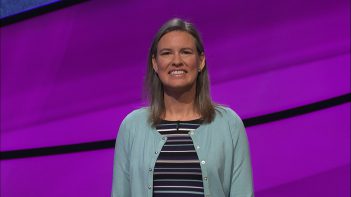 Kate Brandt will appear on Jeopardy! on July 4. (Submitted photo)

Kate Brandt took the preliminary online test to become a contestant last year, traveled to Chicago to take the written test last August, got a call-back in January and did the taping in Los Angeles on March 7. The episode featuring Brandt will air July 4.

This marked Brandt’s fourth time taking the online test. She thinks moving to Carmel helped to give her an edge to get on the show since she previously lived in Chicago.  Brandt moved to Carmel two years ago with her husband, Chad, and their two children, Lindsay, 11, and Mike, 9.

Brandt said the Jeopardy! contestant coordinators checked in with her about the pronunciation of Carmel and to ensure it wasn’t confused with the other pronunciation used in Carmel-by-the-Sea in California.

“I was proud to represent Carmel,” Brandt said.

Brandt said she was encouraged to try out to be a contestant because her childhood best friend participated in the 1991 Jeopardy! College Tournament and another friend was a contestant.

An affinity for trivia runs in the family. Her daughter has made it to the state level of the Indiana Geographic Bee by National Geographic for the past two years. The family also enjoys playing Trivial Pursuit and participating in family trivia night at the Carmel Clay Public Library.

During the trip, Brandt and her family also visited Universal Studios, Disneyland and the Pacific Ocean.

Brandt said she encourages anyone who has an interest in being a contestant to take the online test.

Brandt said she has a deficit in sports and pop culture trivia questions, but as a former lawyer, she enjoys the science and law categories. To prepare, Brandt said she watched the show more religiously, brushed up on Oscar winners, checked out the archives, read up on betting strategies and kept up on current events.

Brandt was given a Jeopardy pen to use as a buzzer and said she practiced at home while watching the show. Brandt said being a contestant was a really fun, once-in-a-lifetime event.